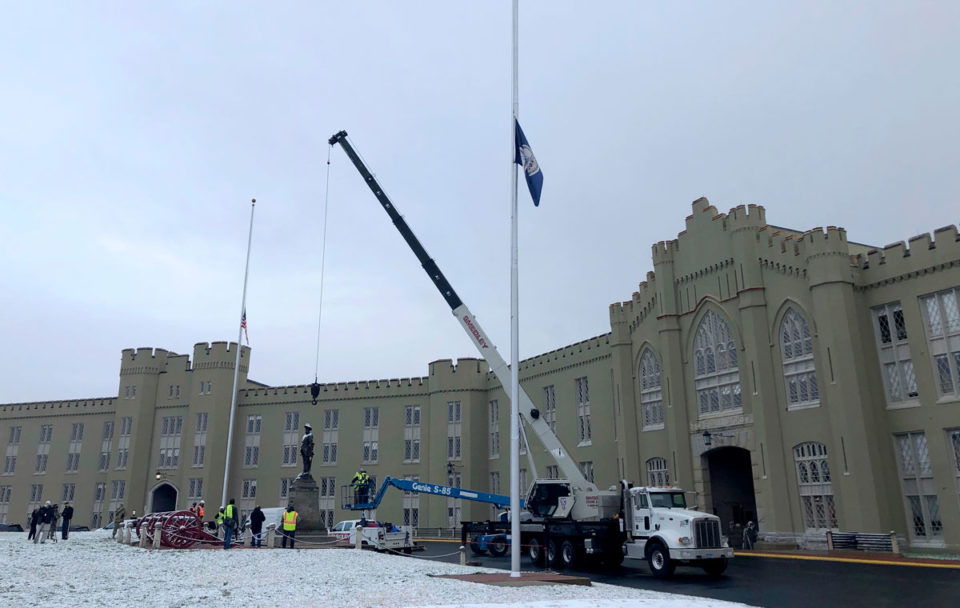 Workers at the Virginia Military remove the Stonewall Jackson Statue

The statue, which cadets were required to salute until a few years ago, was removed before 10 am as a small crowd watched amid snow flurries. VMI’s board voted to remove the statue amid allegations of structural racism at the school.

According to the Associated Press, the allegations included lynching threats and a White professor reminiscing about her father’s KKK membership. Founded in 1839, VMI is the oldest state-supported school in the U.S.

During a summer defined by the Black Lives Matter and Defund the Police movements, more than 800 students and alumni signed a petition calling for the downfall of the statue of Stonewall Jackson to be removed from the campus. However, VMI Superintendent General J.H. Binford Peay III refused, saying he’s made efforts to address racism on campus but would not remove any statues or names.

Both the Washington Post and Roanoke Times have reported widespread racism at the military school in recent, years including incoming freshmen being forced to salute the statue and to re-enact a Civil War battle in which VMI cadets took part. The Military Institute also found itself in hot water in 2017 after cadets dressed in cardboard boxes to simulate President Trump’s border wall.

The issues led to Virginia Gov. Ralph Northam and other state lawmakers to write a letter to VMI President John Boland, saying recent incidents show the school’s values of honor, sacrifice, dignity, and service “do not extend to all students.”

Boland welcomed an investigation into the school and its practices, but Superintendent Peay, who has been running the school since 2003, resigned a week later in October. In November, tapped Maj. Gen Cedric Wins to become the School’s first Black superintendent.

Wins said in a statement on Dec. 7  “it is an understatement to say the relocation of the statue has evoked strong opinions on both sides of the issue.

“The history of VMI over the past 181 years is well-documented. Stonewall Jackson’s ties to Lexington and the Institute as an instructor are part of that history,” Wins said. But “VMI does not define itself by this statue and that is why this move is appropriate,” Wins added.

The statue will be moved to the Virginia Museum of the Civil War and New Market Battlefield State Historical Park. VMI said the removal will cost $209,000, and will be paid with funds from the school’s facility maintenance and operations account.