Voter ID Laws: Know Your Facts And Your Rights 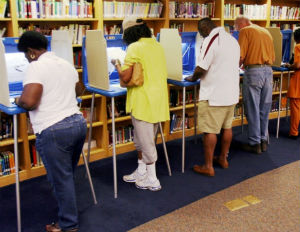 Voter ID laws and similar legislation were created under the guise of preventing voter fraud. In reality, voter fraud rarely happens,Â the ACLU notes. But the reality for some prospective voters – especially black Americans, young voters, the elderly, and people with disabilities – is that these restrictions may prevent them from getting to the polls in November.

According toÂ Let My People Vote, 25% of black Americans do not have a valid ID; among seniors and young voters, that figure is 18%.

Though the presidential election is only a few weeks away, there is still time to combat voter suppression and plenty of online resources that can help:

Register to vote by the deadline. Most state deadlines for registering in time for the November elections range from 20 to 30 days before the election, which means many deadlines are approaching in early October.Â The siteÂ GottaVote.org (sponsored by Obama for America) displays the exact voter registration deadline for each state this year, and allows you to register to vote through its onlineÂ form. The NAACP’sÂ This Is My Vote project andÂ Rock the Vote also provide online voter registration forms.

If you prefer to print and mail in your voter registration, in most states you can use theÂ National Mail Voter Registration Form. Make sure your state accepts this form (USA.gov lists the few exceptions) and be sure follow the form’s state-specific instructions.

Know your state’s photo ID requirements. TheÂ Cost of Freedom Project has an interactive map of the U.S. that shows the photo ID requirements of each state. Click on a state for more information about its requirements, links to more voter information for that state, and/or updates on voter-related legislation. The Election ProtectionÂ coalitionÂ also has an interactiveÂ Map of Shame that details the voter suppression debates in the US and lists the current acceptable forms of ID for each state.

Know when and how you can vote. Another interactive map from the Election ProtectionÂ coalitionÂ allows you to click on your state for a plethora of information about upcoming elections, voting times and locations, and early and absentee voting. There are also instructions on how to proceed if you have moved within your state, if you are in the military or voting overseas, or if you have a felony conviction.

There’s an app for that. Civil Rights groups teamed up toÂ create an app that allows users to verify their voter registration, register to vote, find a polling place, and get updated on relevant legislation. This Election Proctection Smartphone Application offers information and resources voters can use to cast their ballots without a hitch.

Inform and empower others. Voter IDÂ laws widely affect people of color, theÂ elderly, students, and people with disabilities. So bring up the topic when you are on the phone with your grandparents. Organize a voter registration initiative with a student organization at your college. Plan a trip to the local DMV for members of your place of worship.Â You can help combat voter suppression efforts by not only registering to vote and securing a proper ID, but helping others in disenfranchised groups to do the same.