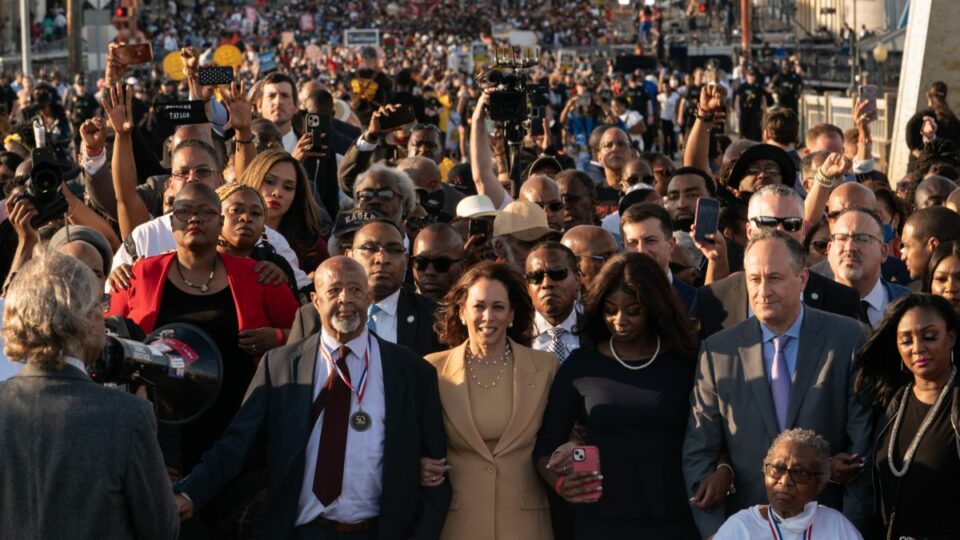 Vice President Kamala Harris continues to call for voting rights legislation as she walks across the Edmund Pettus Bridge on the anniversary of Bloody Sunday. (Image: Twitter)

The walk across the bridge Sunday marked the 57th anniversary of the voting rights march from Selma to Montgomery, Alabama, known as Bloody Sunday. On March 7, 1965, more than 600 marchers were on hand for the walk, but the group made it only six blocks before local and state law enforcement agents violently attacked them with billy clubs and tear gas.

Harris said those who crossed the Edmund Pettus Bridge that day in 1965, which included the late John Lewis, did so not only to ensure the right to vote but “to ensure all the people of our nation, no matter where they start, have the opportunity to succeed.”

“A record number of people cast their ballots in the 2020 elections. It was a triumph of democracy in many ways. But not everyone saw it that way. Some saw it as a threat,” Harris said, according to CNN, adding “un-American” laws enacted in GOP-led states are making it harder to vote.

Harris said Sunday she and President Joe Biden “have put the full power of the executive branch behind our shared effort” while criticizing Republican lawmakers for blocking the John Lewis Voting Rights Advancement Act and the Freedom To Vote Act.

Biden also reiterated his call to pass comprehensive voting rights legislation during his State of the Union speech last week.

Two days after the marchers retreated in 1965, Dr. Martin Luther King Jr. led a second group in a symbolic march to the bridge. Civil rights leaders sought court protection for a third full-scale march from Selma to Montgomery.

Less than a year later, President Lyndon B. Johnson signed the Voting Rights Act of 1965 into law.