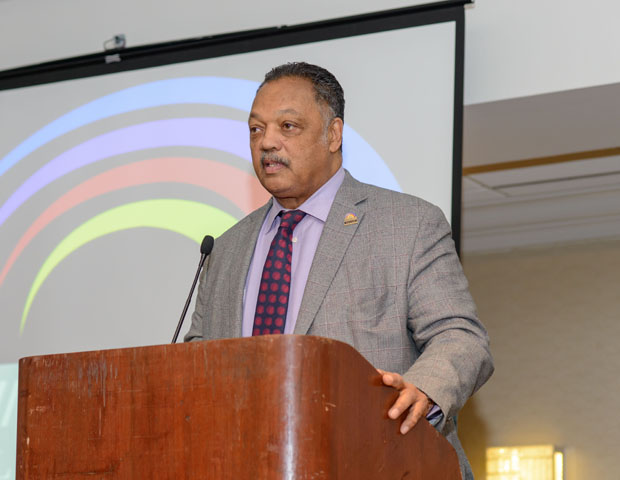 Beginning Thursday morning with some of the most powerful blacks in America, the panel, “The Role of Corporate Boards when Driving Diversity,â€ featured the few who have the non-diversified privilege of sitting on a corporate board of directors. “30% of the largest 250 companies still don’t have one single African American board director,â€ said Black Enterprise’s President and CEO Earl “Butchâ€ Graves, Jr., who moderated. “The worst offender is Silicon Valley.â€

Panelists included former Secretary of Transpiration, Rodney E. Slater, who is now a partner at Squire Patton Boggs; W. Rogers Jr., Chairman, CEO, and Chief Investment Officer of Ariel Investments, LLC; and Bruce S. Gordan, former President and CEO of the NAACP known as the “Godfatherâ€ of black corporate board directors. “People who aspire to be to be on corporate boards say, ‘How do I get paid to be on these boards?’ If your mission is to get paid your head is in the wrong place,â€ said Gordan. “Board members ask questions over and over. It’s not hard to get the right conversation going in the room if you ask the right questions and follow through calling the CEO a week or month later. It’s a constant beat on the issues.â€

Graves, who asked an ongoing collage of great, thought-provoking questions, talked about the watered down effect of defining diversity. “The word ‘diversity’ has gotten to be a dirty word,â€ he said. “Because now as you broaden the word, it is a diversion away from African American.â€

“People get shy in the boardroom, comfortable, and want to make all the white guys comfortable,â€ said Rogers. “I always felt a responsibility to ask about their diversity and their board of directors.â€

Check out more corporate board diversity, doing business in Africa and other panel insights on the next page …