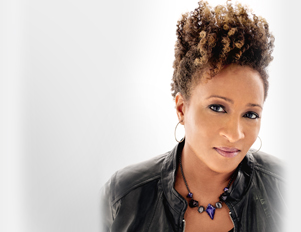 From The Chris Rock Show to Monster-In-Law, and voice-over work in movies such as Rio and this summer’s surefire hit, Ice Age: Continental Drift, Wanda Sykes has used her laugh, her look and her love for comedy to keep people laughing across the world. But while some may think she’s had it easy, the yellow-brick road to stardom didn’t always lead to the Emerald City, and wasn’t always made of glitter and gold. In her words, “Comedy ain’t pretty!â€ But with 11 television shows and appearances, and a soon-to-be 16 films under her belt, this female comedian doesn’t care!

BlackEnterprise.com recently sat down with Sykes at the Gain Scent Matchmaker Studio event in New York City to get the scoop on working in a male-dominated industry, how she’s expanded her career and what’s helped her hold her family together in the midst of changing times.

People have watched your career grow through comedy and film over the years, and now you’re the spokeswoman for Gain’s Scent Matchmaker Studio. How have you been able to build your brand beyond the stand-up stage?

I think because the center of everything is comedy for me. That’s where it all started, and that’s what I still enjoy doing. I think from having that centralized focus, that these other opportunities– instead of me going out to look for them– have [come] to me. I’ve been very fortunate. Like you said, with TV and movies and now in this… it’s like it just fell into my lap. I always say it always comes back to that one centralized thing that I do, and I just want to make people laugh, you know? If [comedy’s] involved, then that’s pretty much what I want to do.

You say if comedy’s involved, then that’s what you want to do. Since that’s so engrained in you, who have been your mentors in your career?

I would say Oprah. I grew up in the Maryland/D.C. area, [and] Oprah started in Baltimore. I remember seeing her in the Baltimore show when she first started, and to watch her go from this woman at [a] local station to this huge world star [is amazing]. When you see what [a] person can do, it becomes something tangible [to you]. Career wise, definitely Chris Rock. That was my first TV gig, The Chris Rock Show. The knowledge that I got from doing that show was incredible because not only did we write our own bits, but we got to produce, we got to go out and edit and I walked away from that show knowing I can do whatever I want to do on TV or film. I had the information. [And] Jackie “Momsâ€ Mabley! She was this older Black woman [who] would just come out in a hat, and looked like a bag woman off the streets. But she was so funny. Â Whoopi Goldberg, Richard Pryor, Bill Cosby, a lot.

From that list, there were only two women. It’s known that there are many more male comedians than females. In this day and age, why would you say that is?

Well, there’s nothing feminine about comedy. Comedy is hard, and you’re really putting yourself out there to be judged or laughed at. Women really don’t want people laughing at them. You have to put that aside. Either you have to address it, like, hey, I’m a woman, or, a lot of female comics would wear a hat or jackets to try to cover up,Â and try to hide all this female (laughs). [Like], Don’t look at my boobs. [Women] hide that to try to go right for the comedy and to audience. So I think that’s the first hurdle female comics have to get over. Comedy ain’t pretty.

You’re a proud lesbian, happily married with kids. Have you ever had any problems or jokes made about you for being an “outâ€ comedian, and a woman, in America?

We’ve been very fortunate. We’ve never really had any problems. People seem to be very open, but then again, we live in areas that… you know… we stay on the coast. I don’t know what’s going to happen in that middle area (laughs). I don’t mess with that, but everyone has been very supportive, and I love when I’m out by myself shopping and people will stop and go, “Hey, how’s the family? The kids are doing okay?â€ That’s just really sweet, and I know that’s just them saying, hey, we support you.

Switch it up for a moment.Â  Audiences have seen an efflux of bankrupt movie stars, artists, athletes, etc… What’s the best financial advice you ever received during your career?

Live within your means. Just because all of a sudden you’re coming into this money, it really shouldn’t change you as far as who you are and the things you value–like going out and buy[ing] this big stupid car and all that. If [those are] the things that [are] going to make you happy, then there’s something else you need to check out before doing that. So, I would say stay within the means. Don’t buy the spinners. Don’t go out and buy the gold plate, whatever. No. Come on!