All I Want for Xmas is a Bionic Bird 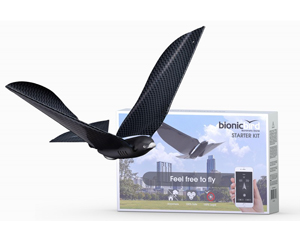 It’s a huge step up from the days of 10-cent wooden gliders. A French startup has released the Bionic Bird–a drone that actually looks like a bird in flight.

The drone is built from the concept of biomimicry. This is an engineering design inspired by living things. According to the manufacturer, Bionic Bird “mimics the majestic soaring of an eagle as well as the dynamic flapping of a swallow, and soon, it’ll mimic the stationary flight of a hummingbird.â€

The drone has an ultra-compact design, weighing less than 10 grams. Its components are made from liquid crystal polymers, carbon fiber, self-lubricating polyacetal, and Mylar.

The inventor, Edwin Van Ruymbeke, an aeronautics engineer, patented a steering system that lets Bionic Bird make rapid maneuvers. The drone is controlled with an app, and the app and device connect via Bluetooth. This connection method allows multiple Bionic Bird operators to fly in the same area without interference. The app is available on both iOS and Android.

Flown outdoors, the Bionic Bird can fly with a range up to about 325 feet. It can reach speeds up to 12 miles per hours. It’s a quiet alternative to noisier propeller drones.

Per the company, the drone attracts birds, such as sparrows and swallows, which have been observed flying alongside the Bionic Bird. The company cautions that the drone’s small, bird-like appearance can also make it a target of birds of prey, such as hawks and eagles.

Bionic Bird can be flown indoors, provided its tail is set to slow speed. Indoors, the pilot can use fingertips on the app’s screen to make the drone do acrobatic moves (and freak out any pets in the house.)

The drone is available for purchase online for about $105 USD.