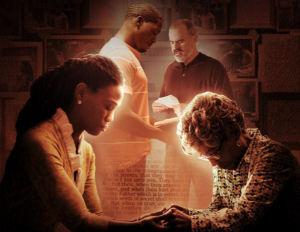 Many black moviegoers are used to the films of Tyler Perry and T.D. Jakes, featuring faith-based undertones and themes, and a new film produced by award-winning Christian movie makers Alex and Stephen Kendrick seeks to change the Hollywood game even further. “War Room” tells a story about the power of prayer with a cast made up of a majority of African American actors, including New York Times bestselling Christian author, Priscilla Shirer, in her movie debut.

“There is an element to the way we tell this story that has power and desperation that would be different if we tried to tell it any other way,â€ Alex Kendrick told ReligionNews.com Â of his decision to opt for a black cast.

He also added that when executives from Sony’s Affirm Films, which is the movie’s distributor, viewed it for the first time, they responded, “If this had been told with a different race, it would be a different movie.â€

Actor T.C. Stallings, the male lead in the movie, told Religion News he accepted the role because of its positive portrayal of the African American family. “What I saw on TV and in movies growing up was all negative. The picture of African Americans in urban areas was all bad language and bad credit scores and bad habits,â€ Stallings said. “There were many upstanding Christian black families in the world, and they needed to be talked about as well.â€

“War Roomâ€ arrives at a time when racial tensions in America have intensified as a result of police brutality cases and the racially motivated murder of black worshipers by a white shooter in Charleston, South Carolina. …Â The unanswered question when it comes to “War Roomâ€ is not whether it will make money, but whether it can induce change in a nation increasingly split across racial lines.