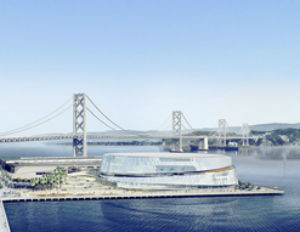 While the Golden State Warrior may look bright because of the players they have on the floor like Stephen Curry and Klay Thompson, there may be more reasons to look forward to experiencing the Warriors as a fan in the near future.

Last year, the organization announced that it plans to build a new arena by Pier 30-32, by the year 2017. According to Craig Dykers, the arena architect, “this building is about people and places as much as it is about the objects in the arena and the cultural venue itself.”

They recently released the latest images of the planned arena, and their plans look stunning, according to NBA.com.

Nestled beneath the gorgeous Bay Bridge, the new arena will back right up against the water of the San Francisco Bay, creating a promenade for fans and visitors to hang out, picnic or shop. With the beautiful San Francisco skyline in the background, the new arena sparkles like a jewel in these images.

Is ‘American Idol’ Getting Rid of All 4 Judges?

FacebookTwitterYoutube
← Rev Run and Family Return to Television ← Is ‘American Idol’ Getting Rid of All 4 Judges?
×
'