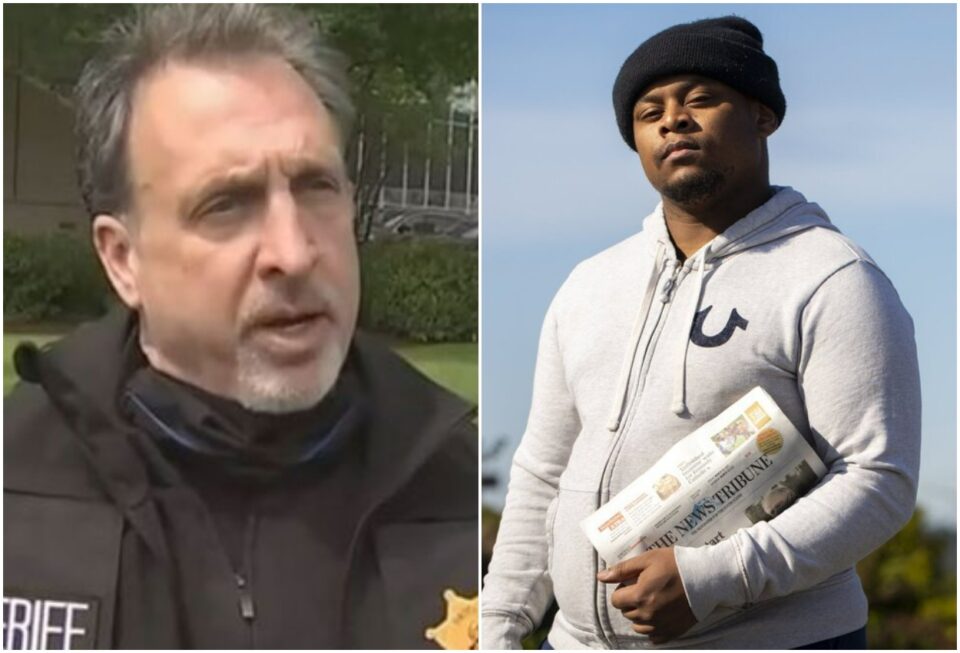 Earlier this year, a white police officer in Washington falsely claimed that a Black man who was delivering newspapers had threatened to kill him while he was on his route.

Now, according to NBC News, a Black Lives Matter chapter located in Washington has demanded that the white county sheriff who made the false claim resign from the police force.

The police officer, Pierce County Sheriff Ed Troyer has been charged for making that claim. Troyer is charged with one count of false reporting and one count of making a false or misleading statement to a public servant, according to charging documents from State Attorney General Robert Ferguson’s office.

The incident took place earlier this year on Jan. 27. Troyer reportedly followed the Black news carrier, Sedrick Altheimer while he was on his newspaper route and called 911 falsely claiming that Altheimer had threatened to kill him.

Although he later retracted his statement to the Tacoma Police Department, Troyer told 911 dispatchers that “[Altheimer had] threatened to kill [me].”

After being followed, Altheimer decided to confront the sheriff who was safely inside his personal, unmarked SUV, which couldn’t be identified as belonging to law enforcement.

However, Altheimer, 24, said that his life was in danger because Troyer’s distress call alerted 40-plus units to the scene.

The reporting of the incident led the Washington Black Lives Matter Alliance to file a complaint with the U.S. Justice Department. They met with officials at the Seattle FBI field office and called for Troyer’s resignation.

An investigation that has been completed by former U.S. Attorney Brian Moran, that was commissioned by the Pierce County Council, discovered that the police officer had broken several of Pierce County Sheriff’s Department policies in the incident. The report stated that “a reasonable person could conclude that Sheriff Troyer exhibited an improper bias in his confrontation with Mr. Altheimer.” The 48-page report was released earlier this week on Tuesday.

Troyer faces nearly a year in jail and a $5,000 fine if he is convicted. He says that the charges are “a blatant and politically motivated anti-cop hit job” by the state attorney general, according to The Seattle Times.

Altheimer’s attorney, Vonda Sargent said, “If Troyer had any ounce of decency … he would resign. He can’t be both the defender of truth and justice while engaging in criminal activity. I don’t expect the police to condemn his actions. I expect them to do exactly what they’re doing, and that’s to hold rank.”