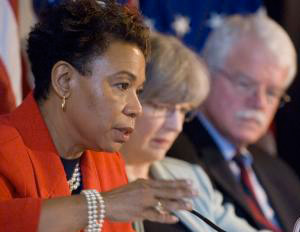 As President Obama prepares to address the nation tonight, members of the Congressional Black Caucus publicly criticized the administration on the military engagement in Libya. Most vocal among them was Rep. Barbara Lee (D-California), the lone member of Congress to vote against the use of military force in Iraq after the 9/11 terrorist attacks.

“I’m concerned, first of all, that any military engagement in Libya or anywhere in the world should have been debated and voted on by Congress. We all know that there’s a serious crisis in Libya. But United States military intervention could really exacerbate the humanitarian crisis, it could heighten instability in the region,â€ she said during a television interview.

She also maintained that the Constitution specifies that the president to have a full conversation with Congress before agreeing to participate in any military intervention and doesn’t believe that the briefing Obama held with House and Senate leadership prior to implementation of the no-fly zone meets that requirement. In addition, she pointed to similar “circumstances of unrestâ€ in other parts of the world, including the Ivory Coast, Syria and Yemen.

Democratic D.C. Del. Eleanor Holmes Norton also strongly disagrees with U.S. involvement in Libya, expressing grave concerns about mission’s purpose. She referred to it as a third war in the Middle East. Like Lee, she believes that the mission could escalate the situation in Libya.

“Most disturbing are confused objectives for the intervention. Is it Gaddafi must go or is this a no-fly mission to protect civilians?” Norton asked. “These objectives are at war with each other. If Gaddafi remains and becomes entrenched, the rebels and other civilians could be in even greater danger. Yet the U.S. position is that we are not after Gaddafi, but are only there to protect innocent civilians.â€

Rep. James Clyburn (D-South Carolina), the House Assistant Democratic Leader, said on in a televised news report that he “supports what the president is doing,â€ but also would have preferred to have received more consultation from the Obama White House beyond the bipartisan meeting with House and Senate lawmakers last week.

In remarks delivered to a group of policymakers and entrepreneurs last Tuesday at the conference “Fostering Growth and Innovation for Small Companies,” Treasury Secretary Timothy Geithner said the Obama administration is working to improve access to capital for small businesses to boost growth and job creation.

“This financial crisis we’re just coming out of caused a lot of damage to the capacity of innovators to access capital and we can’t promote innovation on the scale we need unless we can do a better job in the future of helping innovative companies again gain access to funding,â€ he says.

According to Geithner, the president has signed into law 17 different tax cuts for small businesses, including eliminating capital gains taxes on investments in those businesses and increasing the amount they can expense to $500,000. In addition, the administration has put in place increases in funding and incentives for investment for industries that have the potential for “high, broad economic social returns,â€ such as clean energy, health care, basic science and research.

The Treasury Secretary also announced that Connecticut, Vermont and Missouri have been approved to receive funding for small business lending under the Small Business Credit Initiative, which supports state-level programs that partner with private lenders to increase the amount of credit available to small businesses. The initiative is a provision that was included in the Small Business Jobs Act signed into law last year. The administration estimates that the three states could generate more than $534 million in total lending. California, Michigan and North Carolina have already received funding through the initiative.

“This funding provides a lot of leverage for the taxpayers’ resources, probably roughly 10 to 1,â€ Geithner says. “And we’re working with programs that have an established track record on the ground in states across the country.â€