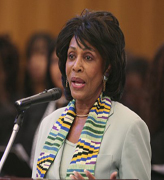 Rep. Maxine Waters is calling on the ethics committee to schedule her trial before the 111th Congress ends in December. The panel, which recommended the censure of New York Rep. Charlie Rangel before the Thanksgiving recess, had scheduled Waters’s trial for November 29. But ten days ago, Rep. Zoe Lofgren (D-California), who heads the committee, announced the delay, citing a need to review new evidence.

“I am disappointed that the committee has chosen not to hold my hearing,â€ Waters told a group of reporters this morning. “I have been denied basic due process.â€

The WatersÂ case centers on allegations that in 2008, she and her chief of staff, Mikael Moore, tried to steer federal bailout money to OneUnited Bank (No. 3 on the BE 100s Banks list with $549.6 million in assets). Her husband, Sidney Williams, owned stock in the minority-owned bank and served on its board. OneUnited was seeking a bailout to recover from investments in Fannie Mae stock and ultimately received $12 million in TARP funding.

Waters, who is a senior member of the House Financial Services Committee, is arguing that since the investigation was first announced in August 2009, the committee has had ample time to build its case against her. She said that she had urged the committee to schedule the trial before the midterm elections, but received no response to the request. She also added that when she questioned Lofgren about when the trial would begin, Lofgren’s only response was that “she was under a lot of pressure.â€

“My message to the committee is simple: Schedule my hearing before the end of the session or tell me, my constituents, and the American public the real reason for this delay,â€ Waters said. “I want this issue resolved immediately and I want my constituents to know that the person they re-elected with 80% of the vote on November 2nd is doing exactly what they sent her here to do: fight for them.â€