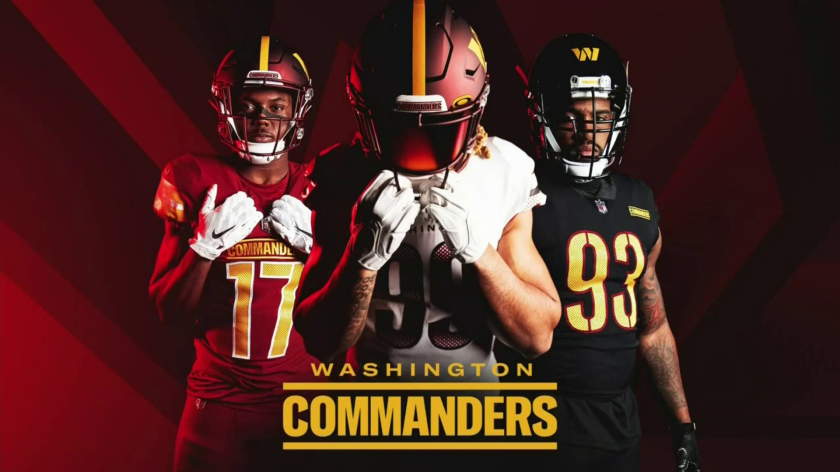 The team announced its new name on Wednesday and a new look and logo.

One legacy. One unified future.

“As an organization, we are excited to rally and rise together as one under our new identity while paying homage to our local roots and what it means to represent the nation’s capital,” co-owner and co-CEO Daniel Snyder said in a written statement.

“As we kick-off our 90th season, it is important for our organization and fans to pay tribute to our past traditions, history, legacy and the greats that came before us. We continue to honor and represent the Burgundy & Gold while forging a pathway to a new era in Washington. Today may mark the first day for the Washington Commanders, but we are and always will be Washington.”

To 90-year-old franchise will continue the tradition of the classic burgundy-and-gold color scheme at the center of the Commanders new identity. The home uniform also will keep the burgundy and gold colors, a specific reference to uniforms of the past.

The Washington Commanders will work closely with fans to help with traditions under a new banner and combine them with new ones that they will help to develop. That would also include bringing back the fight song and designing the second alternate uniform.

I suppose there’s room for two Commanders in this town. pic.twitter.com/xqlHzp6rq0

The NFL team retired the offensive Redskins moniker in 2020 due to pressure from various groups protesting the use of the name for years. With the logo bearing the red face of a Native American for years, several Indian groups and allies said the original name and logo were stereotypical.

The organization entered the NFL as the “Redskins” in 1933. Former owner George Preston Marshall moved the team from Boston to Washington, D.C. in 1937.