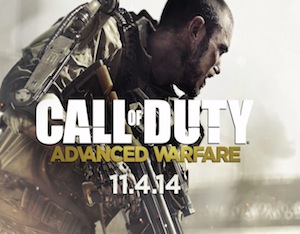 The hype has surpassed a fevered pitch as Activision and Sledgehammer Games have released a new video for the upcoming Call of Duty: Advanced Warfare game.

For those who missed out on E3 2014, the new and improved Call of Duty takes players into the 22nd Century as the game itself is a revamped experience. The new clip focuses on the redesigned multiplayer modes and customization options. Dubbed the “Deep Dive” trailer, gamers are treated to new looks at the exoskeleton, maps, modes and, of course, the potential customization options.

You can see all the hoopla for yourself below:

Starring Kevin Spacey (House of Cards) as the central villain, Call of Duty: Advanced Warfare takes place in a plausible future where the military has aligned themselves with a powerful entity. Technological progress has allowed Private Military Corporations (or PMCs) to become the dominant armed force for countless nations looking to outsource their military needs. For Jonathan Irons (Spacey), the founder and president of the Atlas Corporation, he is looking to become the only PMC in the world.

Call of Duty: Advanced Warfare will hit stores this November 4 and shall be available for the PlayStation 3, PlayStation 4, Xbox 360, Xbox One, and PC.