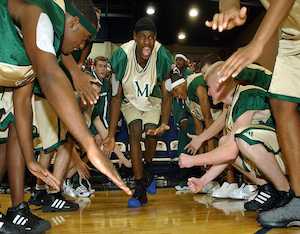 There are only a few days left until the 2014-15 NBA Season begins! With such vaulted anticipation, millions of eyes are focused on LeBron James’ first home game back with the Cleveland Cavaliers.

The point guard / power forward combo re-signed with his hometown basketball team after winning two NBA championships with the Miami Heat. To celebrate his return to the hardwood, Sprite and LeBron teamed up for a really introspective and cool type of ‘home game’ that’s shows off Akron, Ohio.

According to the ‘Obey Your Thirst’ company, LeBron James’ first home game is back in Akron, Ohio with the community. The duo transformed Patterson Park, a notorious place inside the urban Northeastern Ohio area, into a playground for legendary graffiti muralist Futura to transform into a wonder.

After the court was renovated, Sprite and King James held a community pick-up game for aspirational and competitive ballers. As the natives of Akron settled into their new place of recreation, James’ surprise electrifies the crowd (for which you can see below) and marks his first real game back home.

It is no secret that LeBron has wanted to return back to his birthplace and win in an area he truly calls home. With the Pride of Akron back in Quicken Loans Arena, the four time MVP aims to be as much of a force on the court as he is off of it, which is pretty cool.

You can watch the video of LeBron James’ return to Akron below!