Oldest Tuskegee Airman Returns to Oshkosh With His Grandson 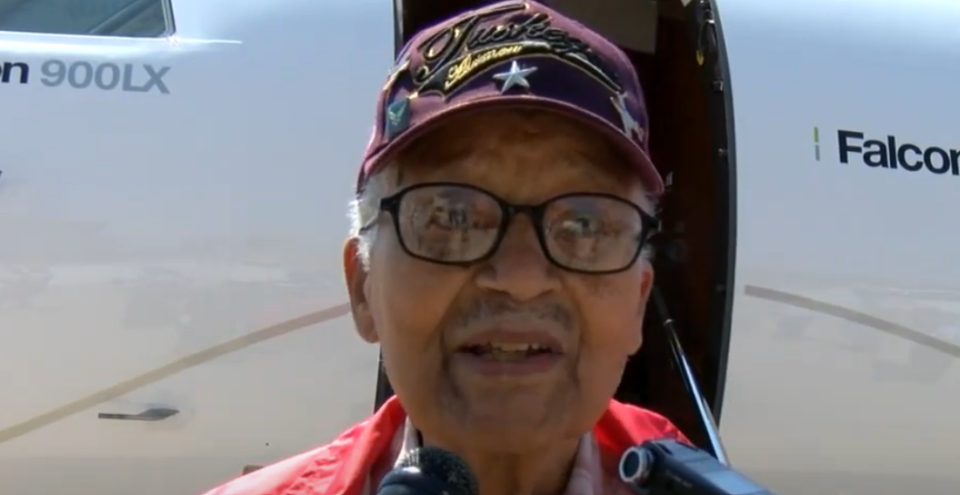 McGee was joined by his 15-year-old grandson Lain Lanphier, an aspiring astronaut who plans to take his grandfather’s legacy into outer space.

“I think he wants to go farther than me, he wants to get into space. I didn’t quite do that,” McGee told Local 5.

McGee flew over 400 combat missions during his time serving in World War II, Korea, and Vietnam. As part of the Tuskegee Airmen, the first Black military aviators in the United States Army Air Corps before it was integrated into the U.S. Armed Forces, McGee and the crew of Black pilots and airmen were subjected to extreme racism after returning from their service.

Over the decades, the Airmen were finally honored by Presidents George W. Bush and Barack Obama before McGee, the last living Tuskegee Airman, received a promotion to Brigadier General by Donald Trump in 2020, the U.S. Air Force reports.

Returning to Oshkosh last Sunday, McGee reflected on his life and decades of service to the country despite the challenges.

“I’ve been here many, many times, but to get back here again as I approach 102 is marvelous,” McGee said. “Having served actively flying 27 of my 30-years, but then being able to come here and share with people that just like to look at airplanes or maybe kick the tires or maintain them, you can’t beat that.”

Now looking forward to his grandson carrying the torch, Lanphier is setting his sights on space travel in honor of his grandfather’s heroism.

” I am currently on my way to join the Airforce Academy and I’m taking all the necessary steps to be ready for that,” Lanphier said. “He has a legacy to live up to and I strive to achieve that every day.”

“For my grandson, all the youngsters and our Country’s future, we need to encourage them and hopefully they will find something they like to do,” McGee said.