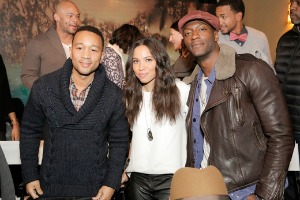 From January 22–February 1, 2016, film enthusiasts from around the world are gathering in Park City, Utah, for the 2016 Sundance Film Festival. With a focus on bringing the most original storytellers together, this past weekend featured a panel session for the upcoming series UNDERGROUND, which included Jurnee Smollett-Bell, Aldis Hodge, Alano Miller, director Anthony Hemingway, show creators Misha Green and Joe Pokaski, as well as producers John Legend, Mike Jackson and Akiva Goldsman.

The city known for its historic mining sites and ski resorts also played host to a number of parties and events with appearances from television, film stars and showrunners, like Gabrielle Union and Ava Duvernay.

In case you missed it, here’s a glimpse at the evening’s star power, Q&As, and movie trailer highlights:

The Birth of a Nation premiere–complete, uncut Q&A, The Sundance Film Fest