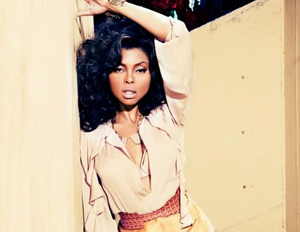 Taraji P. Henson has made a major name for herself in Hollywood and taken her modest beginnings in the industry as a Washington, D.C. native straight to the bank.

Many know her as the actress who plays the sassy, go-getter, fashion-savvy, take-no-mess matriarch of the Lyon family on Empire, but she also has a rÃ©sumÃ© that includes roles in award-winning projects, such asÂ The Curious Case of Benjamin Button (where she received an Academy Award nomination) Hustle & Flow, Think Like a Man, Boston Legal, and Person of Interest. She’s been nominated for the Emmys and Golden Globes and won a Critic’s Choice TV Award–becoming the first black woman to get the honor–for her role as Cookie on Empire, and remains a fan favorite on social media and beyond.

From her breakout start with Tyrese Gibson in Baby Boy, Henson hasn’t looked back, garnering covers of magazines including Essence, Ebony, W, and Glamour. She also recently served as the ambassador for the American Black Film Festival.Â The single mother of one has also lent her voice and likeness to causes including PETA and Black Lives Matter.

“Life has changed for me dramatically,” Henson told USA Today. “Who thought Cookie would bring me this kind of notoriety? This is the type of character that people judge – she went to jail, she sold drugs. But what happens? (People) run to her? Blows me away every time. That goes to show people like ‘real.'”

Watch highlights of Henson’s career and why she was chosen, via USA Today: