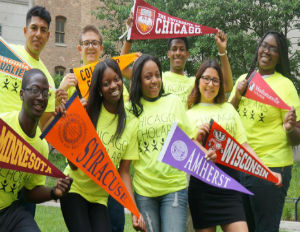 What does it take to succeed in college and, later, in the workforce? We think we know–but do we?

Employers and institutions of higher education clearly believe that measurements like ACT scores and grade point averages are the right yardsticks. But, sadly, these metrics cause us to overlook too many young people who could flourish in school and in the workplace.

He graduated from high school at the top of his class, went to college as a finance major, and landed prestigious internships at places like the Chicago investment firm Loop Capital.

After early success in college, his home life began to unravel. He had to sit out a year to live at home and help his mother. He re-enrolled locally at a community college after that, still needing to work two jobs to take care of responsibilities at home and save money to pay for school.

Because of the challenges Illinois is facing to get a budget passed, Tony is unable to get the grant money that low-income students who attend school in-state have typically been afforded. He used the little money he had saved to register for class but did not have extra money to buy books for his classes.

Understandably, his GPA suffered. And yet, his struggles helped him to hone tremendous leadership skills like persistence, resilience, teamwork, and a remarkably strong work ethic.

Unfortunately, he will not be in the pipeline for many companies upon graduation because his academic standing alone will rule him out. And that’s a loss for him and for the community at large.

As head of the Chicago Scholars Foundation, my charge is to transform the depressing statistics that overshadow my field and to get more young people on the path to success. My team and I work to break down barriers that low-income and first-generation college students face.