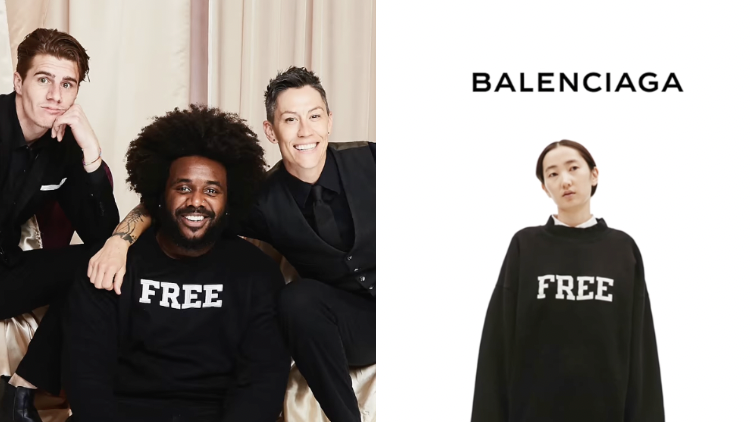 A Black creator and lifestyle entrepreneur has a bone to pick with an alleged culture vulture.

Lamont “Tory” Stapleton is requesting a conversation with the luxury fashion house, Balenciaga, who he believes is selling his designs without his permission.

On Thursday, Stapleton took to Instagram to share the positive message behind his 2019 creation, Struggle is Common, and the release of his black crew neck with “FREE” adorned across the chest. He also listed the chain of events that led him to ask his followers for a listening ear.

“At the start of 2019, after losing a friend to a long battle with addiction, I released a line called Struggle is Common,” the designer captioned a video reel. “My goal was to remind people that they’re not alone and to encourage them to face their problems head on if they truly wish to be FREE.”

Just days after the apparel drop, Stapleton explained that he wore it to an “extremely private birthday party in Los Angeles” where celebrities and musicians alike lauded his design. The video he posted captured photos and moments with Kim Kardashian, Kanye West, Paris Hilton, and more. He also recalled having more in-depth conversations about what he had created.

“Fast forward to August 2021, a bunch of people began tagging me in a Vanity Fair video which featured Diddy, now known as LOVE, wearing what they knew to be my design,” Stapleton continued, adding that he was confused.

Then, he shared that friends made him aware that rappers Da Baby and Anuel were also wearing the shirt on separate occasions.

“At this point it became apparent that someone had clearly “borrowed” my design, but I had no idea who,” Stapleton recounted.

“That is until recently when multiple friends sent me a link to Balenciaga’s website where they were selling the exact same black crew neck as well as multiple variations of my design for up to 25x the price.”

The post concluded with Stapleton urging his followers and beyond who might know someone at Balenciaga to contact him.  In response, his comments were filled with support and demands for the fashion house to respond.

“All too often, the little people get stepped on by big brands and I just want to ensure that this is not another example of that, but rather just a big misunderstanding,” Stapleton wrote.