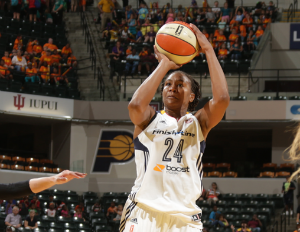 But take note, he’s not the only athlete investing in communities, organizations, and worthy causes around the world. Here are a few other athletes focused on leaving a legacy of giving back.

Tamika Catchings
Indiana Fever
Recently recognized by ESPN and PlayStation as the 2015 Sports Humanitarian of the Year, Tamika Catchings, grew up with a hearing impairment but went on to beat the odds, joining the WNBA team, Indiana Fever. According to ESPN, Catchings was no stranger to being bullied, but she used her disability as inspiration and fuel to do her best in the classroom and on the court. Today, she teaches young girls about embracing their differences, building their self-esteem, and overcoming obstacles. Through her Indianapolis-based organization–Catch the Stars, she “empowers youth to achieve their dreams by providing goal-setting programs that promote literacy, fitness, and mentoring.â€

She also has served on the U.S. Department of State’s Council to Empower Women and Girls Through Sports.

Larry Darnell Fitzgerald
Arizona Cardinals (NFL)
Larry Darnell Fitzgerald, Jr., an American football wide receiver for the Arizona Cardinals of the National Football League (NFL), founded The Larry Fitzgerald First Down Fund. Established to help kids and their families with support during a crisis, and positive activities, the organization has distributed funds to families in crisis such as the Southern Arizona American Red Cross which, according to the Red Cross, prevented ten families from becoming homeless. Additionally, the organization has donated to numerous charities across the United States–Rev. Dr. Martin Luther King Park in Minneapolis, African American Breast Cancer Alliance, Plano Child Development Center, and Kurt Warner’s First Things First Foundation, to name a few.

In 2012, Fitzgerald also traveled to Ethiopia with Anquan Boldin and Oxfam America to help with international relief and development.

Ivory Latta
Washington Mystics, WNBA
In 2012, after WNBA star Ivory Latta’s father and paternal grandmother were diagnosed with Parkinson’s disease, she wanted to do more to raise awareness about the disease. So, she signed on as a national ambassador for the Parkinson’s Disease Foundation. She’s hosted several events, such as a Celebrity Bowl-A-ThonÂ for the Parkinson Disease Foundation to help raise funds and enlist other athletes to help spread awareness to support the cause.

Anquan Boldin
San Francisco 49ers (NFL)
Nominated by ESPN as Sports Humanitarian of the Year, Anquan Boldin, has provided funding and on-the- ground support for youth in underprivileged areas. Through the Anquan Boldin Foundation, he’s provided mentoring, after-school programs, scholarships, and annual summer enrichment programs, for children in Baltimore, South Florida, and San Francisco. According to ESPN, Boldin became an Oxfam Ambassador on his own accord and has testified before Congress to strengthen human rights protections for communities impacted by the oil and mining industries in Africa. Additionally, in 2014, Boldin and his wife Dionne made a $1 million pledge to help youth in need by providing 4-year college scholarships to four deserving high school graduates annually.