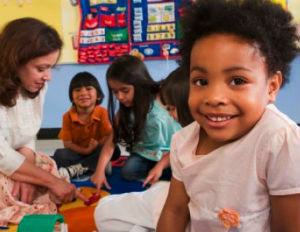 Could the seeds of the income gap between the rich and the poor actually be sown in nursery school?

New census data reveals that children of higher income parents are much more likely to attend pre-kindergarten, which might help perpetuate their familial wealth.

Research suggests that children who attend pre-k fare better later in school and in their careers. By making early childhood education contingent on a parents’ wealth, we’re giving rich kids a big leg up. But we’re also making it more difficult for low-income parents to work. If a child isn’t in school, someone has to take care of them. Sometimes that’s a daycare program. But for families without access, it probably means a mother has to stay home, taking time off from the workforce, and setting back her future career.