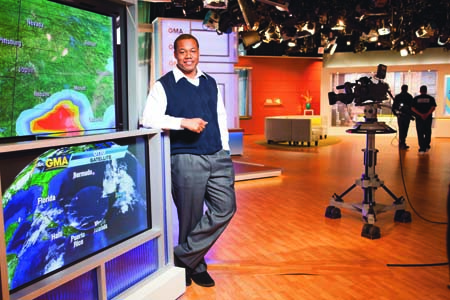 Marcus Walter grew up in the Midwest fascinated by weather patterns and spent his time watching The Weather Channel and NASA TV. His interest and study eventually brought him to New York City, where he now assists a national weather anchor and editor at a network morning news show.

Responsibilities: Walter’s duties as a producer in the studio and assistant during the show require him to meet with and gather information from much of the staff, including executive and senior producers as well as another meteorologist who produces the graphics, which are submitted to Champion for approval. “I make sure when he comes in, it’s smooth sailing,â€ says Walter.

Education: Walter completed his undergraduate degree in meteorology in 2008 at Pennsylvania State University as part of the Bunton-Waller Fellowship, named after the first African American man and woman to graduate from Penn State. Walter is currently completing his master’s at Cornell University in atmospheric science, with a focus on climate data analysis. “I liked research and realized that if TV didn’t work out I could do more with a master’s degree.â€

Nurturing Interests: “Growing up, I always had an interest in math and science,â€ Walter says. “And I was fascinated by the power and strength of storms. I was also a good public speaker.â€ His high school principal introduced him to a local ABC News meteorologist named Phil Schwarz. “I’m still in contact with him today. He also went to Penn State, and he says it’s one of the best schools in the country for meteorology. Whenever I’m home, I visit him and talk about what I’m doing with my life and what I’ve learned.â€

Securing an internship: “Working on my master’s and still having an interest in television, I wanted to see what it was like to work for a national news organization. So I applied to Good Morning America for a Disney/ABC Television Group (www.disneyabcjobs.com/internship.html) internship last January and was notified in March that I’d been one of 12 selected. The internship lasted for the summer [of 2010]. As an intern I worked in the field and series department, and logged a lot of tapes and helped with the summer concert series. I also worked with the weather team one to two days a week. My housing was provided through the IRTS Foundation, which I found out about through Fastweb.com. When I returned to school last fall and learned about a full-time opening at GMA, I applied, and here I am.â€

Important lessons: “I knew television would involve a lot of pressure but on a national stage. It’s intense in terms of workload and how much you have to pick up in a short period of time, how much you have to make yourself available. From watching Sam, I’ve learned that being as organized and as prepared as possible is one of the best ways to handle stress. We work as a team, so if you’re not organized, other people may be hindered. You need to be flexible, to roll with the punches, to expect the unexpected. Don’t get flustered. There are so many moving parts at GMA that you’re forced to work well with people. You have to be able to handle impassioned attitudes. Don’t take it personally. Just make sure you’re doing your job.â€