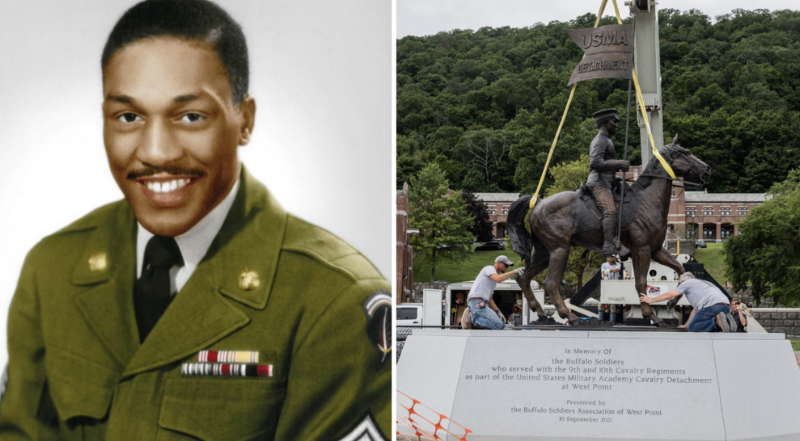 More than a century later, the Buffalo Soldiers are finally being honored at West Point.

Some 114 years after the Black men came to the segregated Army on a mission to teach horsemanship to White cadets, the Buffalo Soldiers of West Point finally have their statue.

At 2:10 p.m. Tuesday, the U.S. Military Academy raised what is now its first outdoor statue of a Black man.

Engraved into the granite are the words, “In Memory of the Buffalo Soldiers who served with the 9th and 10th Cavalry Regiments as part of the United States Military Academy Cavalry Detachment at West Point.”

The ceremony took place after a number of statues of Confederate generals are being taken down across the country.

“Everybody has a right to have their story told,” she said. “Because it’s a powerful story. Just what [the Buffalo Soldiers] endured, their determination and their commitment to prove to the world that African American men can contribute and are viable citizens of this country,” the academy’s cultural arts director for the corps of cadets told the Washington Post.

“We talk about so much pain that Black men experience in America and all the judgments people make about them,” she said. “But when you put this monument up there, you’re only going to be able to talk about their triumphs … their valor, their honor, their patriotism.”

Sgt. Matthews is believed to be the last known Buffalo Soldier to serve at West Point.

The statue was created by sculptor Eddie Dixon in his studio, and other experts worked to make sure the soldier’s uniform and horse equipment were historically accurate.

The statue is a gift to the academy from the Buffalo Soldiers Association of West Point, which raised about $1 million for the project.

The Buffalo Soldiers served as a unit at West Point until 1947. The following year, the Army was racially desegregated, however, accounts of racism remained.