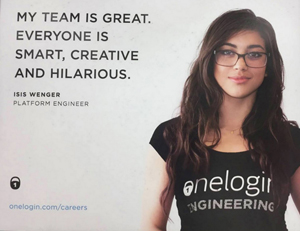 What does an engineer look like? Isis Anchalee Wenger is a platform engineer at a company called OneLogin who appeared in a recruiting ad for her company. Â According to reports, the ad sparked some somewhat sexist comments across social media that questioned if a female engineer could possibly look like Wenger.

In response to the comments, she launched #ILookLikeanEngineer on Twitter to show the world that, despite stereotypes, engineers can also look like her.

“My stories have become such a source of inspiration for so many people. I am now developing a team to build out www.ilooklikeanengineer.com, a safe platform for us all to continue to share our stories and experiences relating to diversity issues in tech,â€ wrote Wenger in the blog Coffeelicious.

Â Take a look below at these women of color who are also proud engineers.