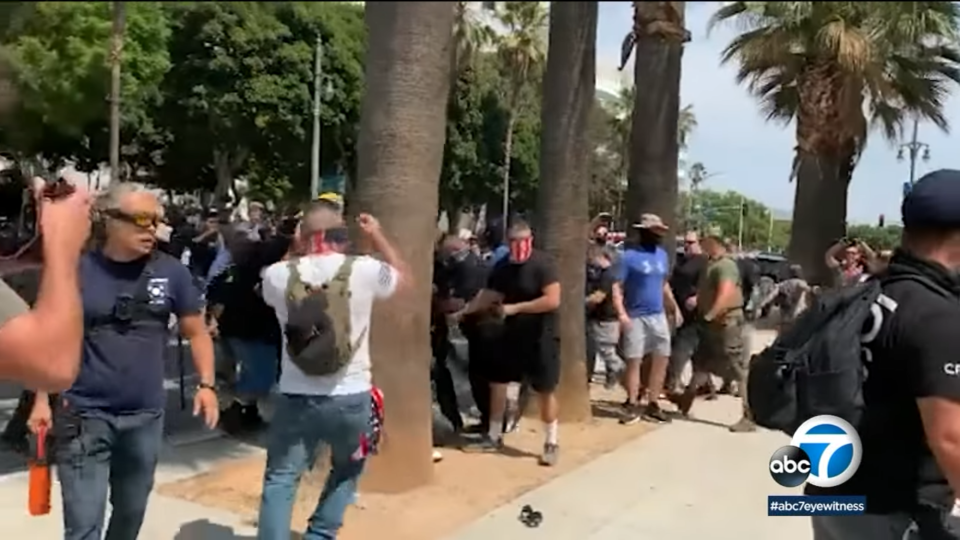 One person was stabbed and hospitalized in the incident as demonstrators from the “Choose Freedom March” protesting against COVID-19 mandates clashed with the “No Safe Space for Fascists” group who were demonstrating against “violent anti-vaxxers.”

Photos and videos of the fights littered social media over the weekend. The LAPD blamed the violence on “Antifa and people gathered for the permitted event on its Instagram page.” According to multiple reports, the violence was started by the Proud Boys. The LAPD later said it was investigating the incident, but no one was arrested at the incident or since.

The rallies came as California and other states are are starting to implement strict vaccine mandates. According to ABC 7, the L.A. City Council voted to have the city attorney draft an ordinance requiring proof of at least one COVID-19 vaccination shot to enter restaurants, bars, gyms, concert venues, movie theaters, and other public indoor spaces.

The Los Angeles County Board of Supervisors is also considering a similar mandate and Interim Superintendent Megan Reilly said all L.A. Unified School District employees will be required to be fully vaccinated by Oct. 15. The county is also requiring all its employees to be vaccinated against COVID-19.

Opponents of the mandates say their rights are being infringed upon despite the fact that the U.S. is closing in on 200,000 new COVID cases a day due to the more contagious Delta variant.

Dr. Francis Collins, director of the National Institutes of Health, pleaded for unvaccinated Americans to get their COVID-19 shots and stop believing misinformation on Fox News Sunday.

“That was January, February, that shouldn’t be August. But here we are with the Delta variant, which is so contagious, and this heartbreaking situation where 90 million people are still unvaccinated, who are sitting ducks for this virus, and that’s the mess we’re in,” Collins said. “This is going very steeply upward with no signs of having peaked out.”

According to The Guardian, at least 99% of those who have died from COVID-19 in the last six months have been unvaccinated.