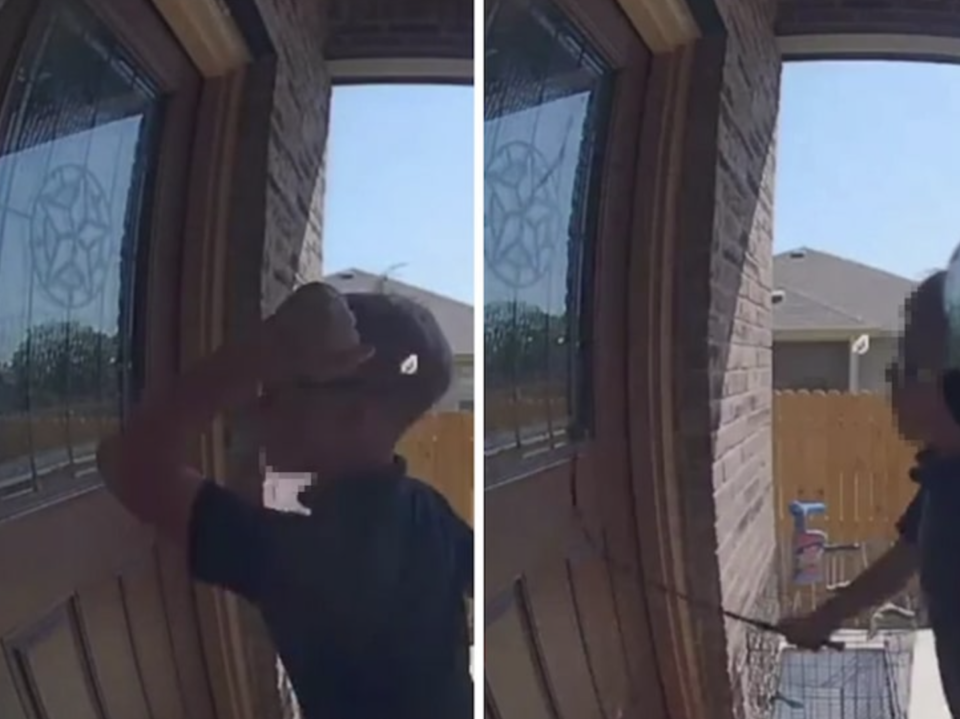 In a case of unmitigated gall, a 9-year-old white boy is caught on video aggressively approaching his Black neighbor’s house on May 13, carrying a whip and belligerently hitting and slinging his strap at the front door, according to TMZ.

The conflict started when the young enraged white boy allegedly had a disagreement with their 9-year-old daughter of Dee and Carissa Nash and wanted to resolve their dispute using his whip, as what comes across in the Ring video, TMZ reports.

Eventually, Carissa opens the door, demands the child to leave her home, and threatens to call the police.

“Little boy, you better get your ass up and off my porch before I call the police, beating on my door like this! I will call the police, you need to leave. Don’t you ever beat on my God damn like that, GO!” Carissa, not seen in the video, is heard yelling to the stunned 4th grader.

Reluctantly, the child leaves, and Carissa shows another video of her husband, Dee, confronting the boy’s father and his son’s deplorable actions. An alleged argument between the two men escalated, and Brunson’s son came out trying to incite a fight with the Nashes.

Brunson then reportedly tried to fire his gun at the Nashes but handled it recklessly, causing a bullet to graze his daughter, according to the sheriff’s office.

Carissa shares the whole encounter on her Instagram page with a caption that reads, “This kid comes to my door with a whip looking for my 9 year old daughter, then puts a big ass scratch on our Audi. The police came out and tells us, “it’ll work itself out since he moving soon” 🤦🏽‍♀️ So when my husband got home, we went to talk to him about the damages done to our vehicle….The dad tells the son to say he’s not there. A couple minutes later he finally comes to the door with a gun! He almost shot himself and his daughter standing behind him smh #KidWithWhip #NeighborFromHell #Racism #Forney #BLM #Texas #shareshareshare #Welcome2Nashville