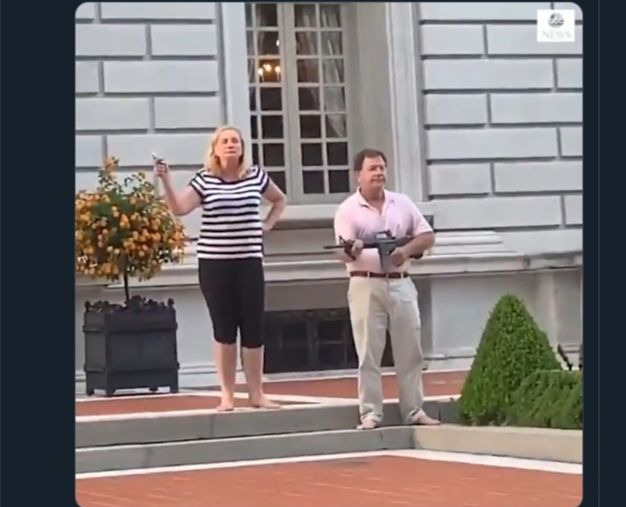 A white St. Louis husband and wife were seen pointing firearms at protesters Sunday night outside of their Central West End home, according to ABC News.

The incident took place during a protest against St. Louis Mayor Lyda Krewson, who publicly revealed the names and addresses of protesters who wrote letters to her in support of defunding the police department. In an act that some have labeled as intimidation, Krewson read off the names of the individuals during a broadcast by the mayor’s office on Facebook Live.

“It is shocking and misguided for Mayor Lyda Krewson of St. Louis, to broadcast the addresses of those who dare to express a different viewpoint on an issue of public concern,” the ACLU of Missouri said in a statement. “It serves no apparent purpose beyond intimidation. We are stronger when we foster open dialogue. The chilling of debate should bother everyone, no matter whether they agree or disagree with the mayor on this particular issue.”

I’d like to apologize for identifying individuals who presented letters to me at City Hall today. This was during one of my Facebook updates as I was answering routine questions. Never did I intend to harm anyone or cause distress. The update is removed and again, I apologize.

As protestors, who are demanding the resignation of Lawson, headed to her residence, a man armed with what appeared to be a semiautomatic rifle and a woman showcasing a silver-plated pistol with her finger on the trigger, came out of their five-story limestone home. They drew their weapons at the protesters while yelling at them that they were on a private street.

A couple pointed guns at protesters in St. Louis as a group marched toward the mayor’s home to demand her resignation. https://t.co/aKMiqfjpRB pic.twitter.com/0H0W6JPFUR

The couple, who identified themselves as lawyers, are Mark McCloskey, 63, and Patricia McCloskey, 61. They claim to support the Black Lives Matter movement and that the “actions of a few individuals who chose to exploit the otherwise peaceful protest” put them “in fear of imminent harm,” they wrote in a written statement.

🤬 This is a crime. And it’s CRAZY. ⁣ ⁣ That’s St. Louis. ⁣ ⁣ And the armed people you see are Mark and Patricia McCloskey – ATTORNEYS – who did this when protestors WALKED PAST THEIR HOUSE on their way to protest the Mayor. Protestors weren’t even there for them. ⁣ ⁣ Not a single person threatened them. They pulled out an AR-15 assault rifle and a pistol and began aiming it at men, women, and children. ⁣ ⁣ It violates Missouri Criminal Code 571.030.1(4) which says citizens are not allowed to exhibit “any weapon capable of lethal use in an angry or threatening manner.” Follow @GrassrootsLaw.

“The peaceful protesters were not the subject of scorn or disdain by the McCloskeys,” the statement reads. “To the contrary, they were expecting and supportive of the message of the protesters. The actions of violence, destruction of property, and acts of threatening aggression by a few individuals commingling with the peaceful protesters, gave rise to trepidation and fear of imminent and grave harm.

“Both Mr. and Mrs. McCloskey acted lawfully on their property which sits on a private gated lane in the City of St. Louis,” the statement reads. “Their actions were borne solely of fear and apprehension, the genesis of which was not race related. In fact, the agitators responsible for the trepidation were white.”

The couple said they’ve held a “long-standing commitment to protecting the civil rights of clients victimized at the hands of law enforcement.”

Albert S. Watkins, a lawyer for the couple, added, “The McCloskeys want to make sure no one thinks less of BLM, its message and the means it is employing to get its message out because of the actions of a few white individuals who tarnished a peaceful protest.”

Again, this is a crime. People are on the SIDEWALK walking past the gaudy mansion of Mark and Patricia McCloskey in St. Louis, on their way to protest the Mayor, and they are out here pointing guns at people. They should be charged and disbarred for this. And Mark is holding the AR-15 wrong. It would literally burn his hand off if he shot it like that. Damn fools. 📷 by Daniel Shular // Follow @GrassrootsLaw. 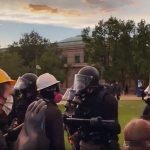 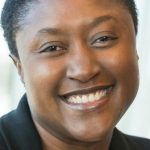