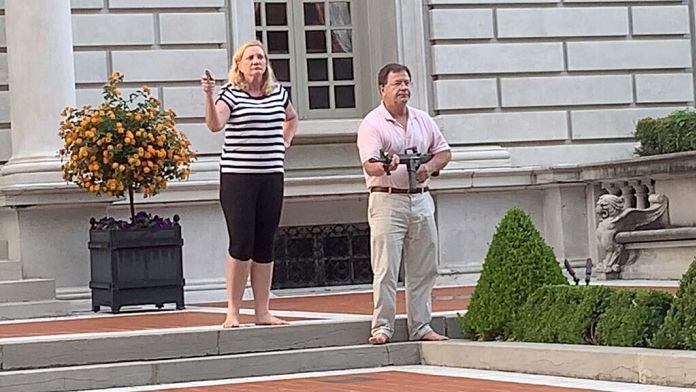 It took long enough, but finally the white couple who went viral last year after they were seen brandishing a pistol and assault rifle at a group of peaceful Black Lives Matter protesters, have reportedly had their guns taken away.

Mark McCloskey and his wife Patricia McCloskey pleaded guilty on Thursday to misdemeanor charges in the 2020 incident, HuffPost reports.

It was in June 2020 when a group of Black Lives Matter protestors marched past their home en route to the Mayor’s house nearby. Mark and his wife came outside their homes with guns in tote out of fear for their safety they claimed.

The McCloskeys both work as lawyers and maintained themselves during their court hearing on Thursday. When asked if he recognized that his actions put others in harm’s way, Mark replied, “I sure did your honor.” After the hearing, Mark expressed his lack of regret for his actions.

“I’d do it again,” he said from the courthouse steps in downtown St. Louis. “Any time the mob approaches me, I’ll do what I can to put them in imminent threat of physical injury because that’s what kept them from destroying my house and my family.”

“Both of them understand that what they did is a violation of Missouri law,” the couple’s attorney, Joel Schwarz told NPR. “I think it was equitable and justice was served.”

“But,” he added, “if faced with a similar or same situation it’s something [Mark McCloskey] would do again.”

Last month, Mark announced his campaign to run for Senate in Missouri, CNN reports. He’s been receiving support from the Republican party with Missouri’s Republican Governor, Mike Parson previously saying that if the McCloskeys were convicted, he would pardon them.