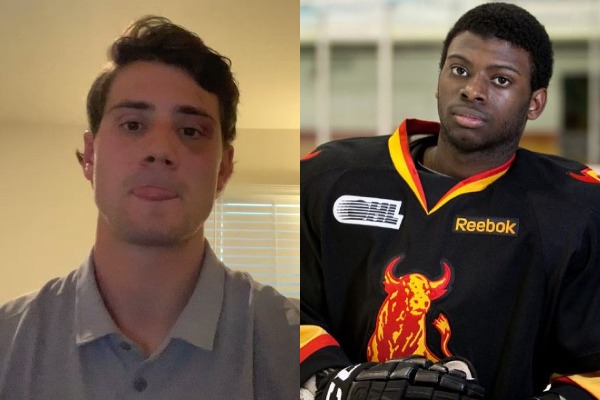 The East Coast Hockey League suspended player Jacob Panetta indefinitely after being accused of making a racist gesture toward a Black player over the weekend.

ESPN reports that the Jacksonville Iceman defenseman is accused of making a racist taunt at South Carolina Stingrays defenseman Jordan Subban. The accusations stemmed from a Saturday game when South Carolina’s Andrew Cherniwchan and Jacksonville goalie Justin Kapelmaster sparked a tussle between the teams.

Subban took to Twitter, recalling the melee, saying that when he tried to engage Panetta in a fight, Panetta allegedly responded by making racist gestures in an animal form.

“As soon as I began to turn my back, he started making monkey gestures at me, so I punched him in the face multiple times and he turtled like the coward he is,” Subban tweeted.

More like @JPanetta12 was too much of a coward to fight me and as soon as I began to turn my back he started making monkey gestures at me so I punched him in the face multiple times and he turtled like the coward he is. There fixed it 👍🏾 https://t.co/JtPqpN9wwE

On Sunday, Panetta posted a video on Twitter claiming he wasn’t making a racist gesture. Panetta stated that “racism has no place in this world and no place in the game we love.” He said he was telling Subban that “You’re only tough when the refs get involved,” and then “did a tough-guy bodybuilder-like gesture toward him” that he has made to other players in other games.

But the damage is done. The ECHL suspended Panetta indefinitely, and the Iceman released him from the team amid an ongoing investigation.

“Though the investigation and review is ongoing at the league level, the Jacksonville Icemen will be releasing the player involved effective immediately and will continue our mission of sharing our love of community and hockey,” the statement read.

“On behalf of the entire Icemen organization, we apologize to anyone who was offended and look forward to beginning the process of healing together as one. Thank you.”