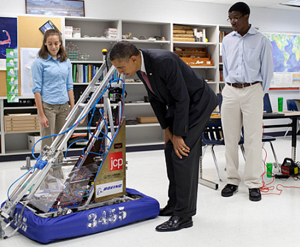 Did you know that the constitution calls for the legal protection of scientific inquiry and discovery? That makes sense since several of our founding fathers were inventors and scientists themselves, including Thomas Jefferson,Â  Benjamin Franklin, and George Washington who experimented with farm crops.

With that spirit in mind, President Barack Obama hosted the first science fair at the White House in 2010. The second one was conducted Feb. 7 of this year. More than 100 students from over 45 states attended, sharing their latest inventions — from a robotic arm to waste-reducing dissolvable sugar packets. The fair was replete with everything a future scientist or techie would enjoy, including an appearance from “Bill Nye the Science Guy,” who is the CEO of the Planetary Society. There were 38 winners representing 40 competitions and organizations.

The White House Science Fair celebrates the student winners, who come from a broad range of science, technology, engineering and math (STEM) competitions across the country. Obama viewed the students’ projects and spoke on the importance of STEM education. (Click here for a sampling of the projects.)

It’s not too late to get your child involved. Ask them to explain their favorite project, tweeting their answer to the #WHScienceFair hashtag or filling out the form on WhiteHouse.gov for a chance to see their submission posted on the website.