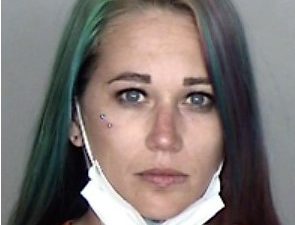 A drunk white Latina who almost killed a Black traffic flagman has been charged with a hate crime, Enterprise-Record reported.

On April 2, Martina Marie Garcia was arrested for driving under the influence of alcohol and assault with a deadly weapon. The weapon being her Ford Explorer SUV, speeding toward a Black man at between 50 and 60 mph. The incident took place in Paradise, California, in Butte County.

Butte County District Attorney Mike Ramsey said Garcia is “alleged to have driven her Ford Explorer SUV north through a traffic-controlled work zone in the 5500 block of Scottwood Road in Paradise at approximately 40-50 miles per hour while workers were present trying to clear trees.”

The recommended speed is 25 mph.

On March 30, Garcia, 33, was told to slow down by the Black man working as a traffic flagger. She and her passenger made “an obscene gesture” as she quickly drove through the construction zone, defying his instructions.

She was also seen drinking beer while driving.

Coming from the opposite direction and passing through the same construction zone, Garcia and her brother, 43-year-old Antonio Burgos, return and both made gestures.

The Black worker was holding a “Slow” sign, but Garcia drove toward him at 50-60 mph. She hurled hate speech to the man who had to jump out of the way to avoid being struck by Garcia.

Workers at the construction site followed Garcia’s SUV and later called the authorities.

“If found guilty of the hate crime allegation, Garcia could face an additional three years of prison time. Without the hate crime, Garcia faces up to four years of state prison time,” the Atlanta Black Star reported.

Garcia was released from jail on $55,000 bail and appeared in Butte County Superior Court. Her attorney is waiting for another arraignment where she is expected to make a plea.