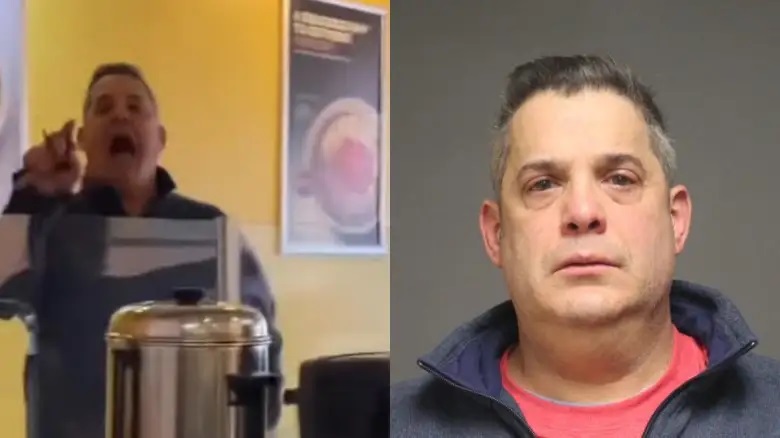 The white man who launched a racist attack against young smoothie shop workers has been fired from his job at financial advising giant Merrill Lynch.

James Iannazzo was seen in the now-viral video filmed on Saturday at the Robes smoothie shop in Fairfield, CT, launching a racist tirade against the workers over a smoothie with nuts he said caused his son to suffer an allergic reaction, 6 ABC reported.

Video shows Iannazzo in a rage, throwing the smoothie at the workers before hurling racial epithets and attempting to charge through the employee entrance.

“He threatened to kill us multiple times,” employee Charlie Hill said. “He tried to come behind the doors, and I started recording.”

The workers called the police and Iannazzo immediately surrendered himself. He admitted to never telling the employees about the allergy and had only requested the smoothie have no peanut butter.

The allergic reaction put his 17-year-old son into life-threatening anaphylactic shock causing the teen’s hospitalization. Once the video of the incident was released, it didn’t take social media too long to identify Iannazzo.

I've identified this man as James Iannazzo of @MerrillLynch being racist and assaulting a minor pic.twitter.com/O8Ic6jyh3p

Iannazzo was charged with “intimidation based on bigotry or bias in the second degree, second-degree breach of peace, and first-degree criminal trespass, CNBC reported. He is scheduled to appear in Bridgeport Superior Court on Feb. 7.

His enraged response to the smoothie shop workers also caused him to lose his job at a company he had worked for since 1995. Merrill Lynch fired Iannazzo on Sunday, one day after the incident received over 2.6 million views.

“Our company does not tolerate behavior of this kind,” Merrill Lynch spokesman Bill Halldin said.

“We immediately investigated and have taken action. This individual is no longer employed at our firm,” said Haldin, referring to the investment and wealth management division of Bank of America.

Iannazzo has since released a statement apologizing for his racist attack against the young staffers.

“My actions at Robek’s were wrong, and I deeply regret them,” he said. “They do not reflect my values or my character. I feel terrible that I lost my composure so completely.”