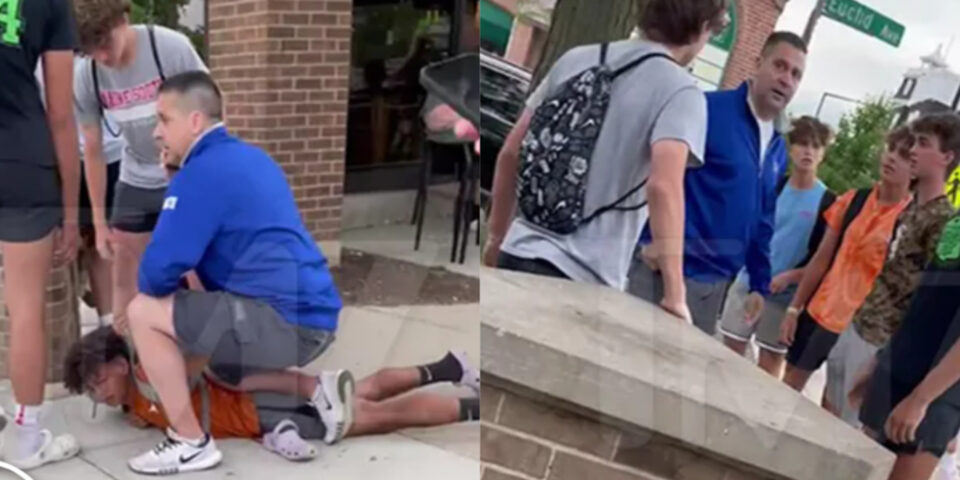 Chicago police have reportedly launched an investigation into a white off-duty cop who restrained a 14-year-old Puerto Rican boy he accused of stealing his son’s bike.

Cellphone footage captured the moment the unidentified male pinned the teen to the ground and kneeled on his back outside a Starbucks in the Chicago suburb of Park Ridge, Fox 32 Chicago reported. The boy’s friends, who are all white, intervened and demanded the man get off the teen who did nothing wrong.

Despite the teens’ pleas to “get off” their friend,” the male identifies himself as an off-duty cop. A clip of the encounter surfaced online, with many demanding the off-duty cop’s firing and arrest.

“White, off duty, Chicago cop pins 14-year-old Puerto Rican boy to the ground with his knee at a @Starbucks,” one Twitter user explained while reposting the clip.

“He accused the boy of stealing his son’s bike. Fortunately, the boy’s friends helped him. The man should be charged & arrested!”

White, off duty, Chicago cop pins 14 year old Puerto Rican boy to the ground with his knee at a @Starbucks He accused the boy of stealing his son’s bike. Fortunately the boy’s friends helped him. The man should be charged & arrested! #chicago #chicagopd #starbucks #parkridge pic.twitter.com/r9VLUi4bFI

The boy’s parents, Nicole and Angel Nieves, posted the clip online to raise awareness and demand action against the cop they feel racially profiled their young son.

“This adult did not use words — he used force; he used his hands,” the parents wrote in an Instagram post. “Grabbed our son’s wrists, body-slammed him, then held him down with his knee to forcibly restrain him.’

“Regardless of the circumstances, getting physical with a minor as an adult for any reason other than self-defense is unacceptable.”

In their caption, they asked the public to help them seek justice for their son by holding the off-duty cop “accountable” for his force against a teen he wrongly accused.

“Help us hold this officer accountable for his actions,” they wrote. “And show that we stand together against any form of violence, racism, and injustices happening to our youth.”

The Chicago Police Department said it had launched an internal investigation into the case, NBC Chicago reports.