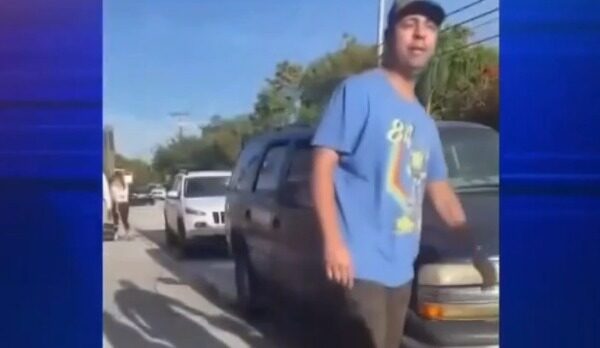 A group of middle school students in Miami was subjected to a racist verbal attack from the white parent of another student.

The video seemingly captured the moments an enraged white man hurled racial slurs and foul language at young children outside South Miami Middle School in the 6700 block of Southwest 60th Street, WSVN reports. When confronted by other parents, the man fled the scene.

One concerned parent expressed outrage at the man’s actions toward her child.

“I was boiling, I was boiling. I was very upset. I was disappointed, this is not the way a person should talk to a child,” she said.

The mother, who chose to remain anonymous, said the altercation started after the enraged man accused the children of hitting his car.

Her son was incited by the man’s actions and finally responded.

“He proceeded to continue to antagonize my son, so finally, my son turned around and was like, ‘You’re gonna hit me? Hit me, hit me, hit me,’ and he walked up to him, and the guy just kept going,” the mother said. “And you see from the video, he said he was going to beat his ass; he kept calling them negros.”

“Listen, negro, get the [expletive] out of my face, [expletive] negro mumbling cracker,” the white parent said.

He then used a racial slur about himself while berating the minor.

“I’m proud to be a cracker. I’m happy with what I see in the mirror every day, are you?” the man said. “Are you happy when you see black in the mirror.”

“Miami-Dade County Public Schools (M-DCPS) is disappointed by a recent incident that took place between a parent and a student outside of South Miami Middle School before the start of the school day,” the statement said in part.

“Currently, Miami-Dade School Police is conducting a thorough investigation regarding the matter. M-DCPS remains committed to fostering a welcoming learning environment by highlighting the importance of respect and restraint.”