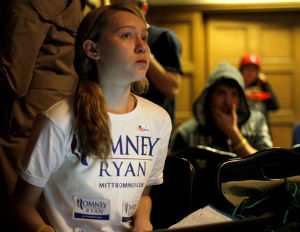 The schadenfreude-y tumblr, White People Mourning Romney, which shows photos of, well, distraught Mitt Romney supporters lamenting their candidate’s loss, has become an internet sensation (nearly 90 percent of Romney voters were white). But Mychal Denzel Smith writes at the Root that the Tumblr demonstrates some very real, racial divides in the country.

In one sense, it is the end of, as Fox News host Bill O’Reilly put it, “traditional America.” The white vote doesn’t decide elections anymore. One can’t simply appeal to white racial angst and expect to be victorious. Future presidential candidates will have to be able to communicate ideas to people of a variety of complex identities and not alienate any of them in the process through a visible hostility.

That has been the GOP game for years, but in the last two presidential elections it has cost them big. Obama has walked away with historic levels of support among African Americans, Latinos, women and young people, and he posted clear Electoral College and popular-vote wins.