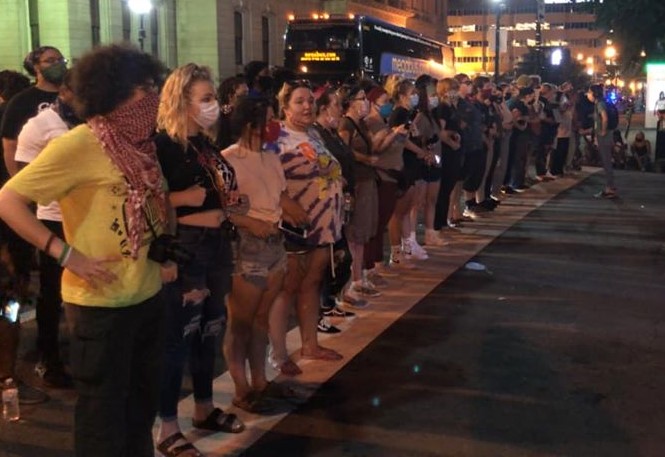 In a show of solidarity with black protesters fed up with police officers brutalizing black citizens, a group of white protesters formed a human shield blocking the Louisville Metro Police from harming black demonstrators, according to The Grio.

The Kentucky National Organization for Women posted a picture from a protest last week in downtown Louisville. The photograph showed a line of white protesters, with their arms locked, forming a standing barrier between Louisville Metro Police officers and black protesters.

Louisville photographer Tim Druck captured the picture that has gone viral. The photo appeared on the Facebook page of the Kentucky National Organization for Women. During the rally, protesters called for justice in the death of EMT worker Breonna Taylor, who was shot to death in her apartment in March by Louisville police while they were serving on a no-knock warrant. The protest also supported the Black Lives Matter movement amid the recent spate of police killings of unarmed black people.

The now viral photo was shared on social media platforms by organizations such as the Kentucky National Organization for Women, where it was shared more than 100,000 times on Facebook.

“This is a line of white people forming a barrier between Black protesters and the police. This is love. This is what you do with your privilege,” the post states.

The Louisville Courier-Journal reports that according to Druck, Chanelle Helm, a lead organizer for Black Lives Matter Louisville, addressed the white protesters using a bullhorn and said: “If you are going to be here, you should defend this space,” and instructed people to form the line facing police at 6th and Jefferson streets.

Druck, who stated he showed up to take photos of the protest around 9 p.m. Thursday, said a police presence had come to that territory to block off intersections downtown as the crowd grew.

“She was asking for white folks to use their privilege, and put their bodies between police and the other demonstrators,” Druck said. “And people responded. They didn’t, they didn’t need to be convinced. Everybody willingly and enthusiastically did it.”