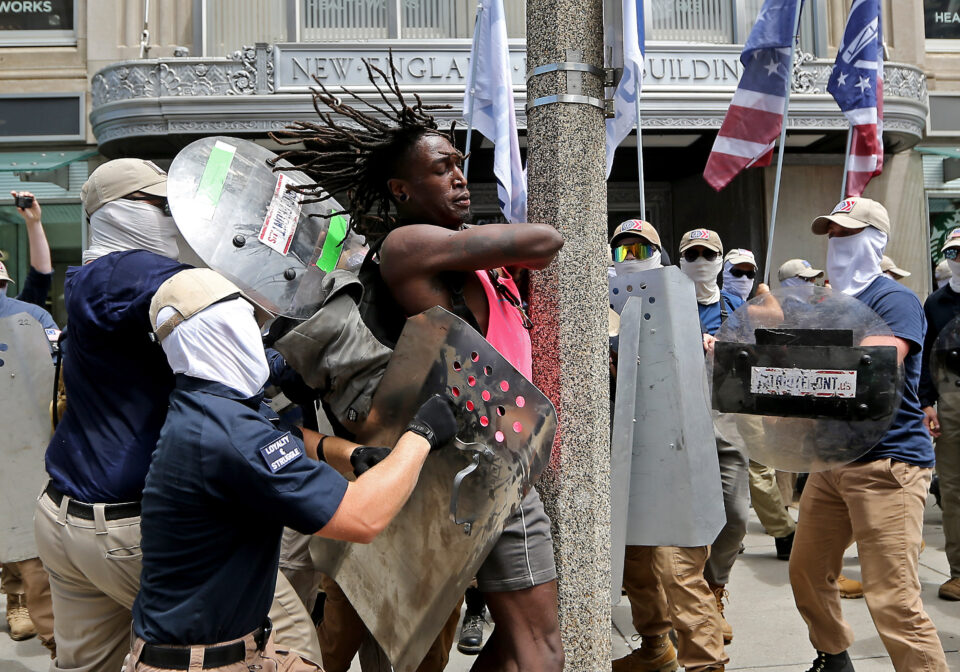 BOSTON, MA - July 2: A fight breaks out as the white supremacist group, The Patriot Front marches thru the city of Boston on July 2, 2022 in , BOSTON, MA. (Staff Photo By Stuart Cahill/MediaNews Group/Boston Herald)

A white supremacist group known as Patriot Front attacked a Black man as they terrorized the streets of Boston on July 2, according to The Boston Globe.

Approximately 100 members began marching the streets of downtown Boston around noon on Saturday with their faces covered by masks and sunglasses. They also wore khaki pants, navy t-shirts and baseball caps, with several carrying shields as they marched to a snare drum.

The police were called to Copley Square around 1:30 p.m. after several members attacked a 34-year-old Black man near Dartmouth and Stuart streets. The Boston Police said they found the man with lacerations on his head, left eyebrow and ring finger of his right hand. He was taken to Tufts Medical Center in an ambulance.

The man told the police that he was walking on Dartmouth Street when he was knocked to the ground by a group of men wearing masks and carrying shields. The man said several others joined in when he tried to swing his arms to protect himself. The group also reportedly chanted “Life! Liberty! Victory!”

According to Boston Police Sergeant Detective John Boyle, the group continued to assault the man while he was the ground. The other men “joined in, knocking him to the ground and continuing to assault him,” said Boyle.

“The group in question was later identified as the Patriot Front,” he added.

The group left the area around 3:30 p.m. by boarding a train at the Oak Grove station to take them to their vehicles, which were reportedly parked along Banks Place. License plates on the vehicles were registered to multiple states including Texas.

According to the Southern Poverty Law Center, the Patriot Front is a Texas-based white nationalist hate group that broke off from Vanguard America following the “Unite the Right” rally in Charlottesville, Va., back in 2017.

Boston Mayor Michelle Wu condemned the Patriot Front and chastised them for their hatred and cowardice. “To the white supremacists who ran through downtown today,” she wrote. “When we march, we don’t hide our faces. Your hate is as cowardly as it is disgusting, and it goes against all that Boston stands for.”

To the white supremacists who ran through downtown today:

When we march, we don’t hide our faces. Your hate is as cowardly as it is disgusting, and it goes against all that Boston stands for.

No arrests were reported.