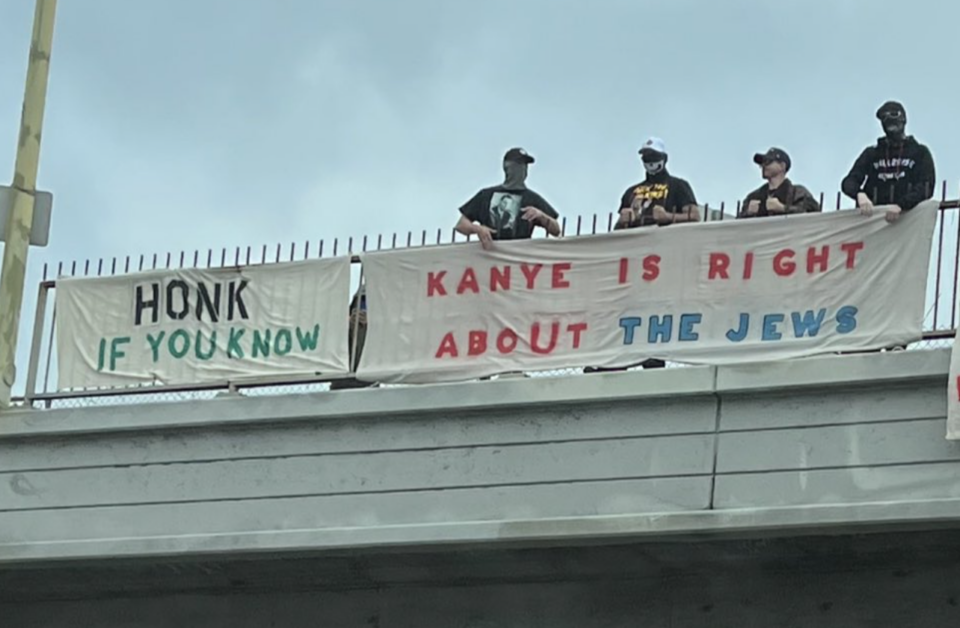 Residents were unexpectedly confronted with Nazi salutes as they drove along the freeway in Los Angeles.

Members of a white supremacist hate group were sighted on Saturday above Interstate 405 in Los Angeles, publicizing their support of recent antisemitic tweets by Kanye West that expressed that the rapper would go “death con 3 On JEWISH PEOPLE.”

According to The Daily Beast, the antisemitic group was identified as affiliates of the “Goyim Defense League,” who rallied two weeks after Kanye’s tweet. Participants, including the Goyim Defense League’s leader, Jon Minadeo, stood beside banners that read “Kanye is right about the Jews,” “Honk if you know,” and featured biblical verses regarding references such as “the synagogue of Satan.”

Photographs captured the rally-goers allegedly raising their arms in a Nazi salute.

Yesterday, the head of an antisemitic and white supremacist group (and his supporters) dropped banners over the 405 in Los Angeles. One banner read, "Kanye is right about the Jews.” pic.twitter.com/FQBFIm0WLX

The Wrap reports that the Anti-Defamation League (ADL) classified the group as a “loose network of individuals connected by their virulent antisemitism,” and condemned the rally as an “Outrageous effort to fan the flames of antisemitism gripping the nation.” One of the police assigned to the scene was allegedly yelled at by Minadeo about “diversity hires” and immigrants.

Police were dispatched; Minadeo began yelling at one of the officers who spoke only English about "diversity hires" and immigrants taking over America thanks to Jewish laws. pic.twitter.com/NrjJXXscz4

“This group is known for espousing vitriolic #antisemitism and white supremacist ideology,” the ADL Southern California tweeted. “Hate has no place in Los Angeles or elsewhere and these attempts will not divide us.”

ADL is reportedly leading an effort, titled #RunAwayFromHate, to persuade Adidas to cut ties with the controversial rapper.

“While Adidas has refused to condemn Kanye West’s antisemitism, hate groups like White Lives Matter and the Goyim Defense League are celebrating and promoting Ye’s comments to further their extremist agendas,” the organization said.

In an exclusive with Women’s Wear Daily, Balenciaga revealed its company cut ties with Ye for his repeated use of hate speech.

Kanye reportedly apologized for the remarks he made on Twitter in reference to the military readiness condition “DEFCON,” during an interview with Piers Morgan.