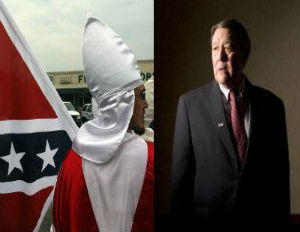 The election of the country’s first black president has spurred an increase in activity among white supremacist groups, and the members of these groups identify overwhelmingly as Republicans.

The Root spoke withÂ Mark Potok of the Southern Poverty Law Center who said that the day after President Obama was elected, there were so many new people expressing interest in white supremacist groups that websites for some of the groups crashed. The groups Potok mentioned were Stormfront, a popular online message board, and theÂ Council of Conservative Citizens (CCC), also known as “the white-collar Klan.”

Read more of the story at the Root.