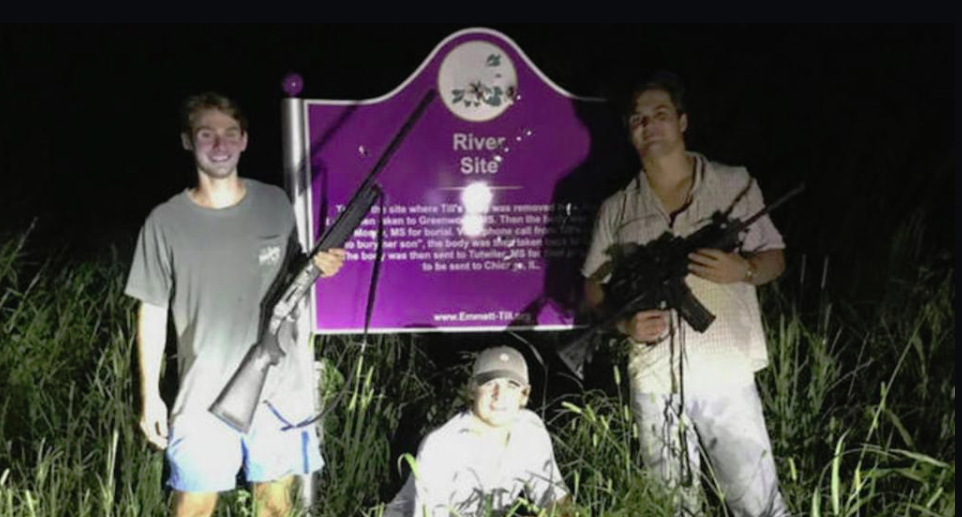 A shocking image surfaced on Instagram: Three white University of Mississippi students posing with guns next to a memorial sign dedicated to the black teenager, Emmett Till, who was murdered in 1955.

According to The New York Times, two of the students in the photo have been identified as Ben Leclere and John Lowe. All three are members of the fraternity Kappa Alpha.

In the photo, one of the students holds a shotgun. Another brandishes an AK-47. The memorial sign is bullet-ridden. According to ProPublica, which first reported on the photo—it isn’t clear if the students shot the sign.

NYT reports that the students have been suspended by their fraternity. “The photo is inappropriate, insensitive, and unacceptable,” and “does not represent our chapter,” stated the Kappa Alpha fraternity chapter.

However, the fraternity is known for prior racist activities. As per ProPublica, “The fraternity, which honors Confederate Gen. Robert E. Lee as its “spiritual founder” on its website, has a history of racial controversy, including an incident in which students wore blackface at a Kappa Alpha sponsored Halloween party at the University of Virginia in 2002.”

The photo has since been turned over to the Justice Department’s Civil Rights Division. The students have not been suspended from the university. A spokesperson from the university told The New York Times that while the photo was “offensive,” the students did not violate the school’s code of conduct.

Last year, the U.S. Department of Justice said it was reopening the murder case of Till 63 years after the 14-year-old was brutally murdered for allegedly whistling at a white woman in Mississippi. Federal officials announced that it launched an investigation into the case based on “new information” received about Till’s kidnapping, torture, and murder.

News that the DOJ was reopening Till’s case was first reported by the Associated Press after the Justice Department sent a report to Congress in March under the Emmett Till Unsolved Civil Rights Crimes Reauthorization Act of 2016, a bill authorized by President Barack Obama granting feds the ability to investigate unsolved civil rights murders committed before 1970.

New revelations about Till’s death were published in the 2017 book The Blood of Emmett Till by historian Timothy B. Tyson.

Till was a native of Chicago visiting relatives in Money, Mississippi, when he was accused of making sexual advances toward Carolyn Donham, 21, at a grocery store. Her then-husband, Roy Bryant, and his half-brother J.W. Milam were charged with killing Till but were acquitted by an all-white jury. Bryant and Milam later admitted to a reporter the next year that they beat and shot the teen before dumping his body in the Tallahatchie River. They were not retried due to double jeopardy laws.