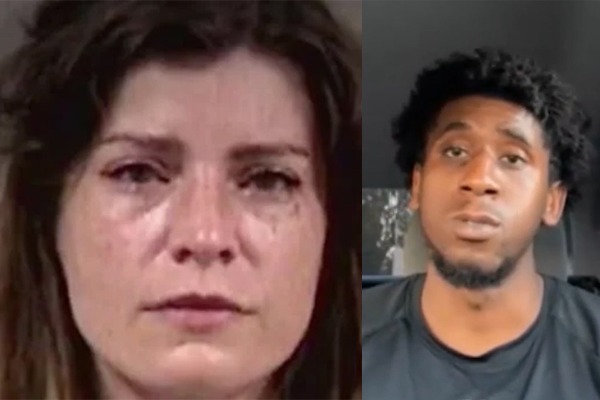 A white woman in California has been charged with a hate crime after she made it her business to follow a Black Amazon delivery driver because she didn’t like how he was driving.

The Alameda County district attorney’s office charged 35-year-old Julie Warland with a hate crime on Wednesday, June 16 after she tracked down a Black Amazon driver in April and called the cops on him, according to the NY Post.

Warland told cops that “he was trying to escape” after accusing him of speeding. But, Kendall McIntosh said he feared for his life after Warland and her boyfriend followed behind him while hurling racial slurs. At one point, Warland even jumped into his vehicle and tried to take control of the steering wheel.

Witnesses stepped in and began to film the violent encounter. McIntosh said he was finishing up deliveries in the Berkely area when Warland accused him of speeding.

“That’s when the harassing started happening,” he told KRON4. “I was just trying to do my job and she wouldn’t allow me to, she closed both double doors in the van I was trying to leave out of.”

He said Warland was aggressive during her approach and her boyfriend stood behind the delivery truck to prevent him from leaving.

“Instantly just started cursing me out like, first sentence I’m getting cursed at,” McIntosh said. “Very derogatory language, you know I was getting constant F bombs thrown at me. I was getting just racially profiled from the jump.”

McIntosh is thankful for the neighbors who stepped in to film and defend the Amazon worker from the attack.

“What constantly was running through my mind was you know it could be me in handcuffs instead of her so no matter what the situation is, just protect yourself,” McIntosh said. “If you feel like you have to videotape it or anything, definitely do that because I felt like if there wasn’t a video. It wasn’t being recorded, she probably could’ve gotten away with saying this.”

Warland’s hate crime charges include suspicion of false imprisonment, battery, using offensive words and willfully threatening a person based on their appearance.