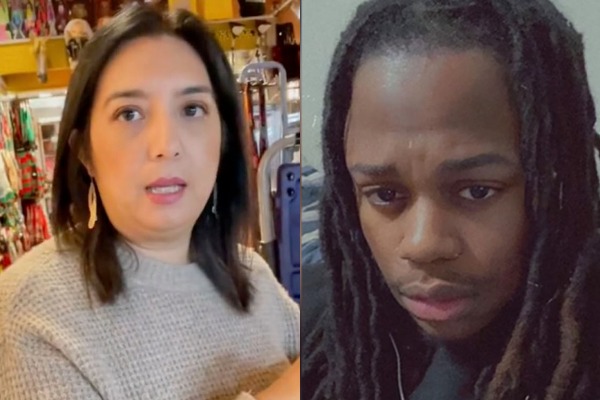 A white female shopper near Sacramento was put on blast in a now-viral video that shows her accusing a Black man of stealing her cellphone that she ended up finding inside of her purse.

The woman dubbed “California Karen” was at a Spencer’s at Sunrise Mall in Citrus Heights outside Sacramento when she forgot where she left her phone. In the video clip uploaded to the man’s TikTok page, the white woman is adamant that the Black man has taken her phone.

“Can you call it because she won’t let us call it?” a woman with the accused man asks a Spencer’s employee.

“Yeah, what’s the phone number?” the worker asks in response.

“California Karen” starts saying her phone number but shows reluctance while accusing the Black man of taking another step to hide her phone after allegedly swiping it.

“Well, he could’ve turned off the ringer,” she says.

The man’s friend voices her frustration with the Karen’s blatant ignorance, gall, and racism.

“Oh my God!” the Black man’s friend replies. “What, do you want him to get f–king naked, lady?”

But “Karen” keeps saying how badly she needs her phone back. She continues to explain how she believes the Black man stole it.

“I just stuck it right here, you walked right behind me, and you took it,” the white woman says.

“I did not take it,” the accused black man says.

The Spencer’s employee then hands her his phone so that she can dial her own cellphone number and hear the ring. Upon calling the number, “California Karen” realizes her phone was inside her bag the entire time.

“Is it in your purse, ma’am?” the woman with the accused Black man said while the cellphone rang loudly in the background.

On Wednesday, while recalling the racist encounter on TikTok, the accused Black man said the whole situation was comedy to him.

“The whole situation was funny to me lol,” he wrote, as noted by NY Post.