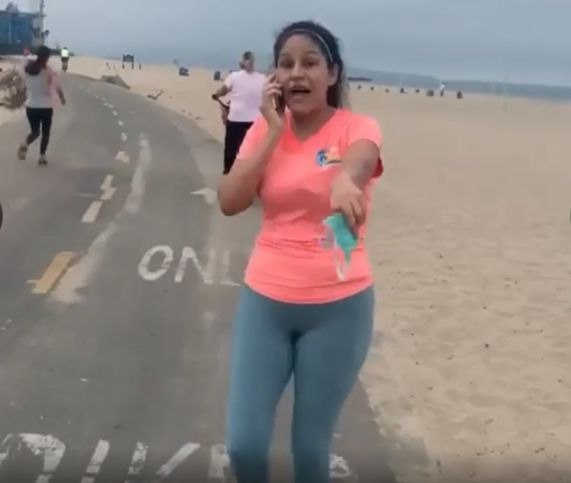 Three Black women were allegedly accosted by a woman on a California beach who used racial slurs while accusing them of assaulting her. The incident is similar to the incident involving Amy Cooper, the white woman who called cops on a Black bird watcher in Central Park in NYC earlier this year.

According to ABC7, the Black women, who were only identified as Brittany, Jessyka, and Raquel, said they were at Dockweiler State Beach when the incident occurred on their Sunday morning run. The woman started to hurl racial slurs at them and can be seen on video claiming to call the police. She states that one of the women accosted and hit her when there is no evidence of any of them doing so.

“I’m calling the police. This woman just hit me,” the woman says in the video.

“You guys are so violent. You Africans are so (expletive) violent,” the woman also said. “You’re an African, right? I’m trying to get a description.”

“My blood is boiling my friend Britt @bcalicurl just had to go thru this racist attack…This lying, evil, racist woman this morning….Britt JUST recorded this in *correction* El Segundo, CA this morning from this evil KAREN.”

🚨*UPDATE* @uhgcareers this is your employee NANCY REYNA – NEGATIVE NANCY!!!!!! 🚨My blood is boiling my friend Britt @bcalicurl just had to go thru this racist attack…This lying, evil, racist woman this morning….Britt JUST recorded this in *correction* El Segundo, CA this morning from this evil KAREN. Please repost/share whatever so we can find this woman and she can be charged. 💔💔💔💔💔 She said there was more but she didn’t catch on tape and this woman was yelling at other black men and women as well.

The El Segundo Police Department released a statement, according to NBC Los Angeles, saying that after an initial investigation, it was determined that the incident occurred in the city of Los Angeles.

“Since then, a disturbing video has been posted on social media showing that woman using racially charged language toward the individual recording,” El Segundo police said in the statement. “Although this incident did not occur in El Segundo, that behavior has no place in any community. El Segundo stands against racism and is committed to making sure everyone who lives, works, and visits feels welcome.”