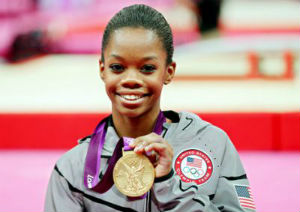 At the 2012 London Olympic Games, a 16-year-old Gabby Douglas captivated the gymnastics world by winning the all-around gold medal. Better still, she made Olympic history as theÂ first American gymnast to win gold in both the individual all-around and team competitions. And yet, she faced hateful comments on social media about her hair–viewed as being unkempt and unsightly.

Fast-forward to the 2016 Olympics, people on social media were hating on Douglas yet again. “Did I choose my hair texture? No. I’m grateful for having this hair on my head,â€ she told reporters in Rio. “When you read that hurtful stuff you’re like ‘OK, wow.’

After finishing seventh in a field of eight in her lone individual event, the uneven bars, Douglas had to fight back tears when reporters’ questions about her performance turned to questions about a wide range of criticism from her hair to her facial expressions to her stance during the playing of the national anthem, the Washington Post reports.

“When they talk about my hair or me not putting my hand up on my heart or me being very salty in the stands, they’re really criticizing me, and it doesn’t really feel good,â€ she said. She went on to apologize for her gestures and facial expressions. “I’ve been through a lot,â€ she added. “I still love the people who love me. Still love them who hate me. I’m just going to stand on that.

Needless to say, criticisms about her hair came from the black community–mostly black women. In a society where black women are made to feel they are not good enough, does DouglasÂ really need the extra burden? Do any of us?

Self-Hatred In The Black Community

I didn’t know about the Gabby-bashing Â until I learned of News One Now, Host and Managing Editor Roland S. Martin speaking with panelists Barbara Arnwine and NBC Black Contributor Lauren Victoria Burke about the extreme. During the conversation, Martin said that the attack on Douglas showcases the deeply rooted self-hatred in the black community.

“These attacks on Gabrielle Douglas, largely by African Americans, about her hair speak to also deep seeded, internal self-hatred that goes beyond entertainers that actually happens in our families, that happens at church,â€ said Martin. â€I’m removing Gabrielle Douglas; I’m saying this is something we have to continue with. It is so deep seeded because we have been conditioned to hate blackness.â€

There is a lot of discussion about black men who hate black women. But what about how black women feel about one another? Do black women put down other black women because they are not comfortable with themselves and in their blackness? What about this need to judge each others’ physical features or style of dress–sometimes under the guise of enlightening another sister (when really, she is being Â devalued).

Filmmaker Nneka Onuorah’s documentary The Same Difference deals with hypocrisy in the lesbian community. Who would have thought there would be hatred amongst a community from the inside that already gets it from the outside? she asked. And yet, black lesbians have created rules about what is and is not acceptable. “People are suppressing who they really are to fit in for fear of being judged,â€ explains Onuorah, notingÂ  black lesbians are policing, regulating, and discriminating against each other.

For example, masculine or butch lesbians can’t be girly–no makeup, no tight clothing, no long straight weaves, and no pregnancies. That’s right, black lesbians who sport baggy pants, kicks, and baseball caps are shunned on social media for giving birth.

So, even within a community of same-gender loving black women, self-hatred in the form of shaming rears its ugly head.

How to Raise an Entrepreneur