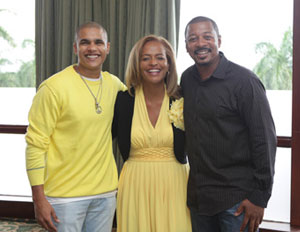 That was the conclusion of participants of a recent technology forum held during our 18th Annual Black Enterprise/Pepsi Golf & Tennis Challenge at the Doral Golf Resort & Spa in Miami.Â  Although the event offered attendees competition on links and courts, rejuvenation of body and soul in the spa and networking on the grounds, it also served as a venue for some serious tech talk.

As the US Labor Department unveiled its dismal report revealing an unemployment rate stubbornly stuck at 9.1% and zero job growth, a cadre of business leaders, entrepreneurs, public policy experts and celebrities sought new ways to develop employment and entrepreneurial opportunities for African Americans.Â  I participated in a roundtable discussion sponsored by AT&T, “Broadband, Economic Development and Jobs,â€ that included former Congressman Kendrick Meek, director Robert Townsend, actor Jeffrey Wright, Minority Media and Telecommunication Counsel President David Honig and political commentator Jamal Simmons, among others. The session moderator was broadcast journalist Jeff Johnson who peppered the group with a series of questions that included how tech can impact job creation, entrepreneurship, content development, healthcare and STEM (science, technology, education and math). As we grappled with these wide-ranging issues, Meek, editorial board chairman for the Website Politic365, asserted: Â “To find solutions, we must have a first base, second base and home plate conversation.â€

In order to narrow the current employment gap–16.7% for African Americans compared to 8% for Whites–we must address the issue on multiple fronts: The tech industry realizing value of cultivating and maintaining a diverse workforce; educational institutions implementing expansive education and retraining programs; and the federal government pushing for the FCC’s year-old National Broadband Plan designed to “ensure every American has access to broadband capability.â€

Our roundtable participants spent much of the three-hour session focused on an area repeatedly discussed by President Obama, former President Bill Clinton and leading economists: Â the “skills gap” of workers ill-equipped for today’s job market. In fact, Clinton said at his recent jobs conference in Chicago that “there are more than three million posted job openings today. Those jobs are being filled at only half the pace they were filled in previous recession. So just think about it: If we have three million more people working, unemployment would be more than two points lower than it is, and America would be in a very different place psychologically.â€

At the session, Honig stressed this chasm proved to be an even greater challenge for minorities. According to MMTC, African Americans represent just 7.1% of computer and math workers versus 70.3% for their White counterparts. And minority tech firms continue to lag in gaining access to capital.

He also maintained the US Department of Justice’s lawsuit to stop AT&T’s proposed $39 billion acquisition of T-Mobile USA could further hinder employment and entrepreneurial opportunities. DOJ officials claim that “unless this merger is blocked, competition and innovation will be reduced and consumers will suffer.â€ Honig says he was “shockedâ€ by the action. Ironically, announcement of the suit was made as AT&T unveiled its plan to bring back to the U.S. 5,000 wireless call center jobs currently outsourced overseas. Last Friday, the telecom filed a “formal response” stating that the acquisition would not diminish competition but provide consumers with better cell phone service at lower prices. (Due to legal reasons, AT&T representatives could not comment of the lawsuit.)