Why the Clintons Must Use the Convention to Make More Friends 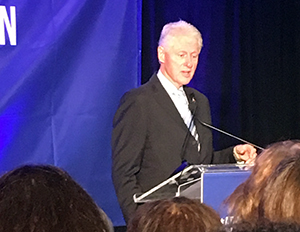 Bill Clinton believes the team that delivered his presidential victories in 1992 and 1996 can do the same for Hillary Clinton in 2016. At a special tribute to the 42nd President at the Museum of American Jewish History, former Clinton Administration Cabinet members and White House officials assembled; ex Labor Secretary Alexis Herman, former Treasury Secretary Robert Rubin, Hillary Clinton’s current campaign manager John Podesta, along with the FOB (aka Friends of Bill). The event was sponsored by AT&T and Microsoft.

The day after giving one of the Democratic National Convention’s most powerful speeches that made a case for the Hillary Clinton Presidency, he doubled-down in a talk that promoted her decades of public service and policy making experience, contrasting the polarizing campaign of GOP nominee Donald Trump. At one point, Clinton openly addressed the issue of race, citing Trump’s rhetoric and strategy, which took a chapter from politics of the Jim Crow South as “raw meat” to woo disillusioned, disaffected “working class whites.” Sounds a lot like a comparison to Richard Nixon’s “Southern Strategy” roughly a half century ago, in which race issues were used to convert southern states into Republican strongholds. He also discussed the Democratic nominee’s full embrace of diversity and fight for economic and environmental justice. He further argued that the next Clinton presidency would be a return to the prosperity that characterized his administration in the 1990s.

The area in which the campaign is most challenged is millennial voters. Scores of pro-Bernie Sanders supporters walked out of the convention after Hillary Clinton’s historic nomination, and that was after Sanders gave Hillary Clinton full-throttle endorsements.

When Bill Clinton and Al Gore represented the Democratic ticket 24 years ago, it signaled a generational shift of Baby Boomers coming to power. Their theme and language spoke to the aspirations of Boomers, who dominated the American workforce and consumer base. In language stressing authenticity and accessibility, they must do the same with the millennials–the current dominant force among workers that are growing in influence in entrepreneurship and politics. Moreover, they must employ the use of surrogates that best connects with the demographic and effectively use the right social media platforms to reach them.

So while the Clintons rally their much needed Friends of Bill, it is vital for the campaign to forge bonds with millennials. That will be a critical objective after the convention and leading up to Election Day.