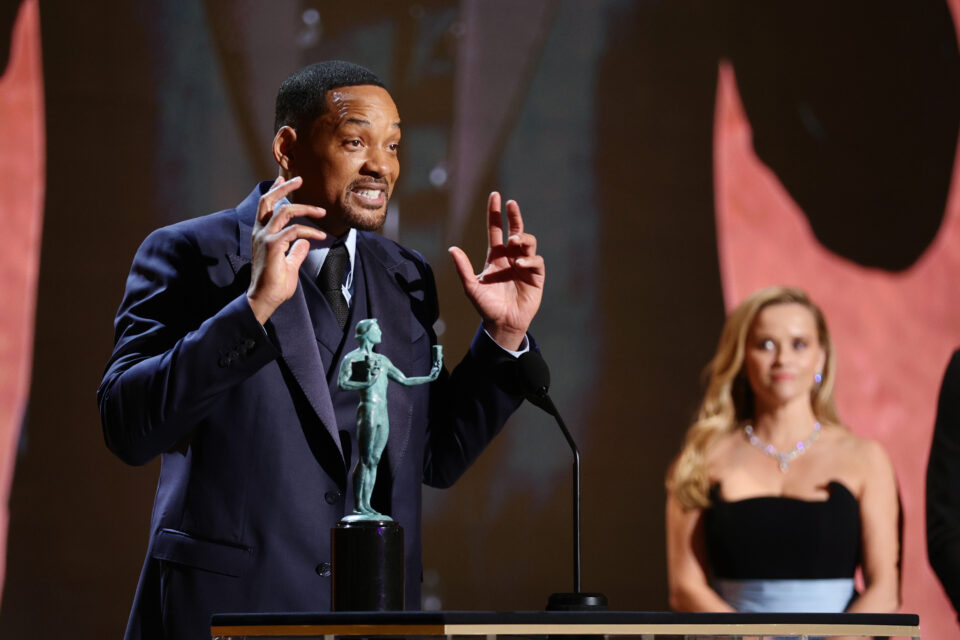 SANTA MONICA, CALIFORNIA - FEBRUARY 27: (L-R) Will Smith accepts the Outstanding Performance by a Male Actor in a Leading Role award for ‘King Richard’ onstage from Reese Witherspoon during the 28th Screen Actors Guild Awards at Barker Hangar on February 27, 2022 in Santa Monica, California. 1184596 (Photo by Dimitrios Kambouris/Getty Images for WarnerMedia)

At the 2022 Screen Actors Guild Awards, Will Smith tearfully and gratefully accepted one of the night’s coveted trophies for Outstanding Performance by a Male Actor in a leading role.

Smith took home the win for his role as Richard Williams in the biopic, King Richard, which he also produced. Based on the true story of Serena and Venus Williams’ childhood, the movie explores Richard’s experience with fatherhood and his singular vision to secure his daughters’ futures in the sports world.

On Sunday night, the Philly-born-and-raised actor accepted the honor while at The Barker Hangar in Santa Monica, California, over Andrew Garfield, Benedict Cumberbatch, Javier Bardem, and Denzel Washington. It was a particularly special moment for him as it is not only his first SAG award, but he is honored to have received it in front of one of the iconic sisters, Venus.

So well deserved. Will Smith takes home his first Actor® for Outstanding Performance by a Male Actor in a Leading Role! #sagawards pic.twitter.com/gD6I4GTVLs

He began his speech, “Thank you. That may have been one of the greatest moments of my career just now. Because my name was called for King Richard sitting next to Venus Williams.”

As tears filled his eyes, Smith went on to rave about the real-life legacy of Richard Williams.

“Richard Williams is a dreamer, like no one you’ve ever known,” he said. “He has a power of belief that borders on insanity and sometimes, tips over the border which is absolutely necessary to take something from impossible to possible,” an emotional Smith further added.

Smith then took a moment to applaud his castmates, including Aunjanue Ellis, who played the role of the Williams sisters’ mother, Oracene Price, in the film. “You demanded authenticity, and you did it in such a beautiful and quiet, powerful way. You did Oracene justice,” he said joyfully.
He went on to also praise his on-screen daughters, Saniyya Sidney and Demi Singleton.
“You guys are actors, so you know how sometimes your on-screen characters kind of bleed into real life,” he said, while the two young actors got emotional. “To walk you around this room tonight, to parent you on this film, to deliver you into this business has been one of the greatest pleasures of my life.”
In the closing of his speech, Smith gave a special shout-out to the entire Williams family. Venus was also tearing up hearing the sentiments.
“You entrusted me and our group with your story. It was my deepest pleasure to honor your family and to tell your story to the world,” the teary-eyed producer concluded in his speech.
For Smith, the wins for King Richard continue to come in. He also accepted the 2022 NAACP Image Award and the 2022 Golden Globe Awards.