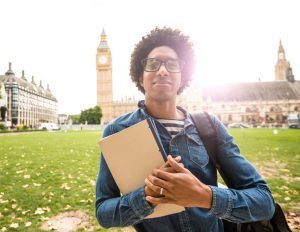 Although the Trump administration seems to take a reactionary approach to globalization, the rest of the world and many businesses not only recognize how the world is becoming more international–they embrace it.

Last week, when Trump signed an executive order suspending the entry of refugees into the U.S. for 120 days–the order also bans indefinitely the admission of refugees from Syria, and prevents entry into the U.S. for 90 days from seven mostly Muslim countries: Iran, Iraq, Libya, Somalia, Sudan, Syria, and Yemen–many in the higher education community erupted.

Nearly 600 college presidents signed an open letter to Trump voicing their concerns about how the ban could affect the country’s “global scientific and economic leadership positionâ€ and its role as the “greatest magnet for talented from people around the world.â€

Yet, just as Trump seems intent on closing borders, interest in studying abroad–not just for a semester, but for all four years–or, rather, three to three-and-a-half years, which is the typical length of college programs in Europe–seems to be growing.

I’ve written about earning degrees abroad here and here, so I was curious about how this short-sighted travel ban could affect American students’ opportunity to study overseas.

I spoke with Jennifer Viemont who, with her husband Tom Viemont, owns and operates Beyond the States, an educational consulting service that specializes in overseas higher education. The Viemonts plan to enroll their own children in colleges overseas, and the Trump ban doesn’t sit well with them.

“As U.S. citizens the order deeply disturbs us, and goes against our personal and business values of internationalization, and helping other Americans become global citizens,â€ Jennifer Viemont told me in an e-mail she sent from Europe, where she is visiting schools.

However, Viemont did have some good news; “Though the order affects foreign students’ ability to study in the U.S., which certainly has a negative impact on U.S. higher education, it should not affect U.S. passport-holding students from studying abroad.â€

Viemont says now is the “time for American, young adults to experience the world and become global citizens.â€ Why now? She is concerned that the “values associated with global citizenship won’t be emphasizedâ€ stateside–at least for the next four years.

For more information about earning your bachelor’s degree abroad, visit the Beyond the States website.