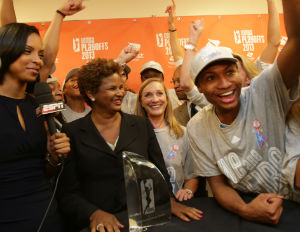 Image: Renee Brown with leading players from the WNBA (file)

Joining the Women’s National Basketball Association (WNBA) in September 1996 as Director of Player Personnel, Renee Brown has been a part of the sports organization since its inception year. Serving as a former assistant coach for San Jose State University, Stanford University, the University of Kansas and the gold medal-winning USA Basketball Women’s National Team in the 1996 summer Olympics, Brown knew early on that sports would be a life-long career of hers.

“I’ve been involved in basketball since I was 14-years-old so it’s been a passion of mine for such a long time,” Brown told BlackEnterprise.com. “It’s not a day I wake up where I don’t still pinch myself. I still enjoy what I’m doing.”

Having worked her way up to Chief of Basketball Operations and Player Relations, Brown oversees player scouting and acquisition for the league, as well as all player related policies and programs. In her 19 years with the organization, she has seen first hand how the league has developed over years and changed the perception of women in sports. She recalls her early days with the WNBA as a time period where young womenÂ  were constantly saying they wanted to be like Michael Jordan, Magic Johnson, Larry Bird or any other great male basketball player. Now, fast forward almost two decades later, and Brown says she is proud to hear young women entering the league and mentioning other female players whose careers they admire.

[Related: 5 Women in The NBA Making History Off the Court]

“When you flip it forward, they will talk about ‘I want to be like Skylar, Lisa Leslie, or Diana Taurasi,’â€ said Brown. “If you think about the changes that have happened, they now have role models.”

With the WNBA helping to open doors for women in the sports arena, Brown says she’s been fortunate to not have experienced any gender challenges throughout her sports career. She credits her passion for the game as her reason for having a successful career and urges other young people who want to pursue a profession in sports to not get discouraged if they don’t meet the qualifications to be a player.

“The people behind the scenes are the ones that really make the show go,” she said. “I got involved in it because I loved the game, but I just happened to not be that good at it. There are so many examples of women who are in sports and owning teams, like Sheila Johnson, or Kelly Loeffler and Mary Brock in Atlanta. I will tell any young person that if you’re passionate about it and willing to sacrifice and do the work, then go and do it.”