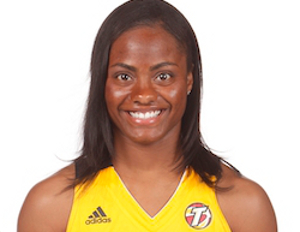 Ivory Latta began her WNBA career as the face of the Atlanta Dream and was the leading scorer for the Detroit Shock last year.

Now, she’s moving into the fashion industry with the launch of her own clothing line.

Rather than being just another athlete with a clothing line, the former Lady Tar Heel hopes to inspire others, the same way people in her life helped inspire her to reach her goals. Her line, named Ivory Latta Clothing, is meant to help the wearer defeat whatever obstacles stand in the way of their dreams.

“I wanted to take all of the life lessons and principles which I have learned from sports and share them with the world to let them know that they too can aspire to be great,” said Latta.

She adds that even though she’s a professional athelete, her clothing line isn’t just for sports fans.

“My clothing line is aimed at providing empowerment, motivation and inspiration to people from all walks of life.â€

Ivory Latta Clothing incorporates several of the core values Latta feels helped her achieve greatness in her life. With themes such as “You Sleep I Grind,” “You Can’t Teach Heart,” and “His Pain, My Motivation,” she hopes to provide empowerment while paying homage to the guiding light in her life, God.

“I’ve always been into fashion and what is stylish, but I didn’t want my line to be just another vanity line which was just another form of self promotion,â€ says Latta. “Instead, I wanted to come out with a line of hats, sweatshirts, t-shirts, socks and other gear that people could wear because it is stylish but also stands for something positive.”